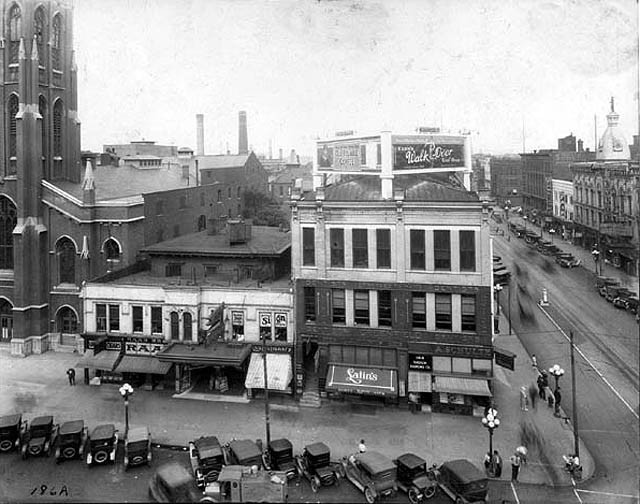 The New Lyceum Theatre closed on April 18, 1924 and the Crowne Plaza is on the site today.

Almost ervery theatre in Dayton was called ‘NEW’ after the great flood of 1913 that ruined everything downtown. They all had to be repaired and remodeled.

The Crowne Plaza is on Fifth Street, a faily long distance away from 138 S. Main Street. This hotel has changed names so many times that if you blink your eyes, it will be something else. But, no, the place on Main Street where the theater was is simply a large grassy park the entire length of the block on Main, a N-S street, where the hotel is way over on the northeast corner of that block.

The Church Bldg on the left is the Masonic Temple. The middle bldg. is the Lyceum Theater. Across 5th St. on the far right is The Mayfair Theater showing the Mayfair Lady standing tall on top of it.

The Lyceum opened on July 22, 1909 with short films with the Morganthaler Sisters singing between the films. It took over a spot formerly occupied by the Eagle, a retail store. It offered $5 in a naming contest while preparing to pen in June. The Lyceum had just one projector and a flat floor at launch. This proved unsatisfactory and, after a brief closure, the new New Lyceum reopened later in 1909 now with a raised floor and a second projector. The Lyceum closed with a triple feature of “The Midget’s Revenge,” “By Mutual Agreement,” and “Brought to Bay” on June 28, 1913. Anderson & Zeigler repaired the National Theater a block away damaged by the city’s major flood months earlier and relaunched the Lyceum there on August 17, 1913 with the live stage play, “A Double Deceiver.”

In the Summer of 1915, B.F. Keith took over the Lyceum / former National Theater. Charles Zonars took the Lyceum nameplate back to its former spot at 138 S. Main relaunching June 30, 1915 and changing the policy back to movies under the moniker of the New Lyceum. Opening pictures were “Japanese Mask,” “Police Dog” and a Pathé newsreel. (B.F. Keith’s launched September 20, 1915 becoming the long-running Strand a year later.) The venue closed as the Lyceum April 18, 1924 at the end of a 15-year lease with Jack Livingston in “Range Patrol.” The neighboring and well-placed Lyceum Confectionery held a renaming contest becoming The Green Mill.