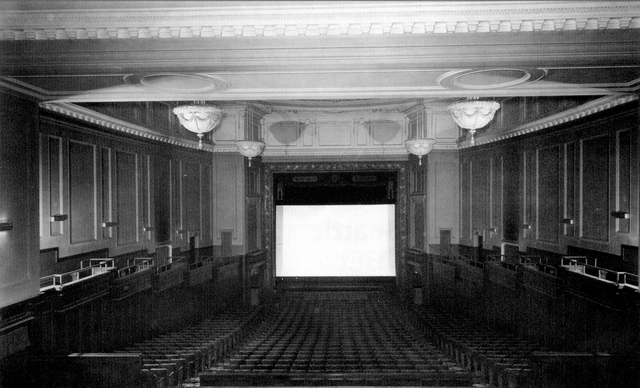 The RKO State Theatre has an interesting beginning, It was originally built as a YMCA in 1887. David Sinclair started Sinclair College here. By May 1908, the college and YMCA had outgrown the building and it became the Auditorium Theatre. There were actually two screens in the theatre, one theatre on the main floor and another theatre on the second floor called the Annex Theatre which opened on December 17, 1908. This is probably the first example of what we now know as a twin theatre. The main lower auditorium seated 1,040 on a stadium plan, with a raised section at the rear (with no overhanging balcony). The upper auditorium (known as the Annex Theatre) became the Hippodrome Theatre in 1913 but closed in 1914 and after remaining empty for a while was converted into the Auditorium Hotel in 1917. The theatre was destroyed by fire in November 1917 and was rebuilt to the plans of architectural firm Preszinger & Musselman.

The theatre was said to be haunted by a young woman that was killed in the sewing room. Strange noises and lights turning on and off by themselves were reported. The theatre also had talkies, before they were even invented! Actors behind the screen would act out the action on the screen.

The Auditorium Theatre was renamed the State Theatre in 1923 when it was managed by B.F. Keiths. It primarily ran B movies and handled the overflow of movies from the Keith’s Theatre. The State Theatre had a personality of its own. The theatre resembled an old castle and was perfect for watching horror movies.

By 1923 the State Theatre was renamed RKO State Theatre. In the 1950’s attendance was dropping off and on October 28, 1964 RKO dropped it lease on the building. The theatre opened the next day under different management and they too closed on January 18, 1965.

A year later, the Dayton Community Theatre moved in and did well. The City of Dayton had other plans. In 1970 the building was demolished and became part of the Dayton Convention Center and Hotel complex.

The State theatre was built as a YMCA in the late 1800s (The largest in the world at the time). For a time it did have 2 theatres operating inside the building. As the YMCA it had a huge gymnasium on the lower level and that became the hippodrome theatre. The YMCA also had many rooms that the men lived in. After the YMCA moved out, The YMCA auditorium became the Auditrium Theatre, and the residential part became the Auditorium Hotel, the Hippodrome Theatre was on the lower level. There was no balcony, although they called the upper part of the theatre the balcony. It was early stadium seating. You entered the auditorium from the right side of the lobby (the only entrance to the house), that put you in the center of the theatre. You could then go down, closer to the stage or up to a higher seat. I spent many happy hours inside that theatre.
I have a photo of the interior.
I saw an excellent production of South Pacific “Live on Stage” there before it closed for good.
I’m Not sure but I believe Sinclair college was started at the third YMCA building on Monument St. in the late 1920s. The second YMCA building is now the City Municipal building. All 3 of Dayton’s YMCAs were the largest in the world at the time they were built.

Gary, you are correct. The city’s municipal building is, indeed, in the former YMCA prior to the one on Monument Avenue. That address is 101 W. Third Street and the swimming pool is still in the cellar area, having been floored over after the city got it. And, yes the third YMCA is actually where Sinclair Community College started in a separate building at the Monument YMCA site, that one being razed in about the late 70s when they moved to the present location.

The URL of the photo lostmemory linked to in the previous comment has been changed. The photo is now at this link.

The December 15, 1917, issue of Motography reported that “The Auditorium theater at Dayton was destroyed by fire with a loss of $300,000.” The figure was a bit exaggerated. The next year’s report from the Dayton City Commission said that “The biggest fire during the year was at the Auditorium Theatre on East Fourth Street, with a loss of $70,348.00.”

The report in Motography was probably a bit late as well. The December 6, 1917 issue of Engineering News-Record had this item in its notices of proposed buildings that was probably about the Auditorium:

Here is a bit of information about the operation of the Auditorium Theatre during the period before the fire that destroyed the house, from the April 1, 1916, issue of The Moving Picture World:

“The New Auditorium is a ‘duplex’ theater. There are two 500 seat auditoriums, one above the other, the operating room of the lower being under the stage of the upper. The lower theater begins the day, and when the first two reels are finished they are sent upstairs and the show is started in the upper auditorium, thereafter the show continues for the day with the lower theater two laps ahead of the upper. There are three operators employed. The projectors are Power’s Six A’s. Projection is in charge of S. Howell, P. Willoughby and W. Stoker.

“The lobby of the New Auditorium is very spacious, is decorated in pale blue and is fitted up with wicker chairs, stand lamps and cozy corners — a beautiful, commodious rest room. The house is owned by the Auditorium Amusement Company, of which that wideawake, pleasant gentleman, Gill Burrows, is manager. We had an extended talk with Neighbor Burrows; also met Mr. Elmer Rauh, president and treasurer of the company.”

The YMCA was dedicated here in 1887 and left in May of 1908 at the end of a 20-year leasing period. The YMCA was taken on for entertainment on its main floor with The Annex Theater launching December 17, 1908. The upper floor was taken on by Will E. Deacon who launched the Hippodrome with a grand opening on March 11, 1909. Though there were many earlier examples of two stages under one roof especially in Opera Houses across the country, the two operations would become one when the Annex became the Auditorium (Theater). The operation operated briefly as the Hippodrome-Auditorium which was a rare, single-operator twin-screen operation.

The flood of 1913 closed the theatre for a short period but it was refreshed and in 1914 another refresh led to a name change. The Hippodrome nameplate was getting dated and the theatre was refreshed simply as the Auditorium Theatre under the Montgomery Circuit late in the year. Montgomery left the market and then went out of business with the lease reverting to the Rauh Borthers. That led to a new owner who had a lawsuit with the Rauhs that then led to it having a short stint as a burlesque house in 1914 by Gill Burrows of the Lyceum. The theater was refreshed as the New Auditorium getting another opening on October 2, 1915 with Clara Kimball Young in “Trilby.” You could pay 15 cents to get a feature film and shorts with a live orchestra on the main floor or you could pay “popular pricing” for 10 cents and just got live piano accompaniment.

The theatre was receiving yet another refresh in 1917 with a new Kimball organ. Fire on November 11, 1917 destroyed the facility and some pointed to the Kimball organ wiring as the reason for the blaze. Within days, plans were drawn for a new “single screen” Auditorium Theatre that would get the main and upper floors of the building. Based on the ending of the theatre, it must have been pretty heavily reinforced. The New Auditorium Theatre launched on October 25, 1919 with William Farnum in “The Wolves of the Night” and D. Ahern at the Kimball Organ.

New operator Ascher’s rebranded it as Ascher’s New Auditorium Theater on June 16, 1920 with Will Rogers in “Jes' Call Me Jim.” Ascher’s brought in none other than Samuel “Roxy” Rothaphel to oversee the high profile relaunch. On August 26, 1921, Ascher’s bolted from the venue. The venue reopened under new management September 24, 1921 under the name of the Auditorium Theatre.

The Miami Amusement Circuit - again under the Rauh Brothers - took on the venue for the third time on December 8, 1922 renaming it as the State Theater with Charles Ray in “A Tailor-Made Man" supported by Buster Keaton in “The Boat.” On September 19, 1923, the Rauhs transferred the theatre to B.F. Keith and the RKO Circuit on the first of two 20-year leasing agreements.

On September 30, 1923, after RKO refreshed the theater, it renamed the venue as the RKO State Theatre with Mary Philbin in “Merry Go Round.” The circuit added sound to keep the venue relevant. RKO dropped the facility at end of lease on October 28, 1964 rather unceremoniously with “Hercules in the Haunted World” and “Castle of Blood.” John Holokan and John C. Keyes of H&K Enterprises Circuit took on the theatre on October 29, 1964 with a double feature of “A Hard Day’s Night” and “For Those Who Think Young.” But sadly they soon found what RKO already knew, nobody was coming to the State for movies any longer. They closed after less than three months of operation ending the cinematic journey of the theater on January 18, 1965 with a double feature of Jerry Lewis in “The Nutty Professor” and Dale Robertson in “Law of the Lawless.”

The theatre had one more chance when it became home to the Dayton Community Theatre on a 5-year subleasing agreement in the Summer of 1965 launching with live stage plays. It opened with its original H&K State Theatre signage. The City of Dayton intervened and ordered the theater and upper level hotel, the New Auditorium Theatre, to cease operations in Summer of 1968 following the play, “Calamity Jane,” in the name of urban renewal. The hotel was closed but the theatre got a reprieve until 1970 when the agreement’s sublease reached expiry.

The King Wrecking Company came in to start demolition in April of 1970 while the theatrical group was still performing “Stop the World” - the theater’s swan song. The performers obviously wished they could say, “Stop the world, I want to get off (or out)” though they continued their performances despite the odd circumstances. And it was said that many performers took home souvenirs as the theatre’s deconstruction led to some interesting trinkets. The King Wrecking Co’s demolition took well over a year to complete due to the facility’s well-built construction. A salvage sale was held in summer of 1971.