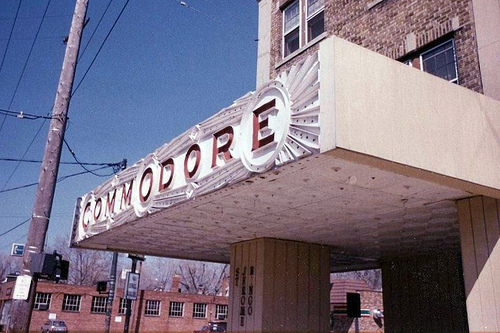 A neighborhood theatre, at the corner of East 152nd Street and Lakeshore Boulevard, that opened August 28, 1927. It closed as a movie theatre in 1972. St. Jerome’s Church was using the theatre as a bingo hall for quite some time.

The Commodore Theatre was demolished in 2008.

339 is the correct address. The whole thing is a little confusing because of a quirk in the street numbering system. All of the East-West streets in Cleveland are named streets (Lakeshore Boulevard, etc) and the North-South streets are numbered streets. (First Street, Second Street and so on) The numbers on the north-south streets start from Lake Erie on the north and progress south. The numbers on the east-west streets start at the center of town, Public Square, and in this case progress east. Lake Shore Boulevard moving east takes a 90 degree right turn north at 152nd street. In this rare instance the street numbers continue north bound 15201, 15202 and so on. Turning right (south) on the corner of east bound Lake Shore puts you on the begining of 152nd street where the street numbers progress south 339, 340 and so on. Picture a cross with the bottom arm being Lakeshore east, the left arm being Lakeshore North, the right arm being 152nd south and the top arm being Macauly. The marque in the photo is the on the begining of the right arm (152nd) and the street number is 338. There are six store fronts to the right of the marque on 152nd and the theatre auditorium is behind those running north-south with the back end on Macauly. I hope I did not add to the confusion with this explanation. In any event, it looks like the local sentiment seems to be strongly in favor of tearing the Commodore down.

The Commodore has been demolished and, as of today, is a pile of rubble on the site. I don’t know what the future plans for the land are.

I was sorry to read that the Commodore is no more, though its demise was probably inevitable, given the decayed state of the building and the general decline of the neighborhood over the years. I recall seeing many films there while growing up in Cleveland, among them an odd, Canadian-made, partial 3-D film called “The Mask” (not the one with Jim Carey) and “Mysterious Island”. I think the seat count of 650 may not be accurate; I remember it being larger than that, but the last time I was there was over 35 years ago. The ceiling was dominated by a huge light fixture, like a large, thick wheel divided into pie-like wedges of red glass.

The food mart mentioned in an earlier post was a 7-11 that opened in the early 1970’s. The 7-11 was across the street from the Commodore Theater.

It’s last days as a theatre were sad, with few patrons. I recall seeing grade-Z horror films (from a different decade) not long before it became a roller rink and, yes, it was small for a roller rink.

Chuck, I noticed that too when I checked it out on google maps the other day lol.

When I was in High School this theater was only open on Friday Saturday & Sunday most of the time. It did open during the week if it was a film that was popular. My friend Bill and I would go here if we missed the film and the Lake of Shore. We knew we could see it here. Also I remember, when I was 7 or 8 my mother would take me here once in a while. But When I was a teenager I could see a double feature for 60 cents.

August 28th, 1927 opening ad uploaded in the photo section. Listings in the Plain Dealer stopped in 1972.

All of those itchy wool seats with smiling gargoyles at the ends of each row were piled into the lowered area below the screen, to use as fill for leveling the floor to make the skating rink. The gargoyle / Devils had a tiny 7 watt bulb in each of their mouths that shown down onto the isle carpet. Anybody remember the Hard Days Night packed house ? Anyway, your seat and some of your butt DNA is most likely still there in the landfill.. now just a leveled grass lot as I last saw it.