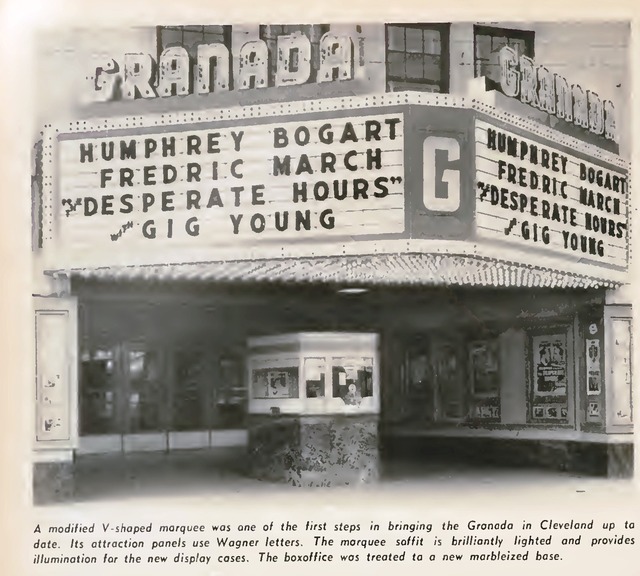 I would take exception to the Granada being the only true movie palace on the west side. The Variety is also a full blown palace with seating only a few seat short of 2000. A treasure now being restored. Check out varietytheatrecleveland.com. But yes, the Granada was a fabulous place.

I thought about the Variety after making the statement, but my last impression of it from the eighties was that it was a bit dowdy. However, it did remind me a bit of the Hippodrome. I am glad it is being restored and look forward to seeing it next time I get to Cleveland.

Most of the Granada’s original Spanish style decor was removed in a mid-1950s remodeling for the Associated Theatres Circuit, which had taken over operation of the house from Loews in November, 1954. Plans for the modernization were by architect Jack Alan Bialosky. A few photos can be seen in this Boxoffice article of June 2, 1956.

Boxoffice refers to Bialosky as a theatre architect, but the only other project I can find is the Princeton Cinema in Springdale, Ohio, attributed to his firm of Manders & Bialosky by Boxoffice of December 12, 1966.

A.K.A. Loews Granada,too bad no photos that work.

Here is a fresh link to the June 2, 1956, Boxoffice article about the remodeled Granada Theatre.

After posting my previous comment I discovered another project designed by architect Jack Bialosky, that being a remodeling of the Shaker Theatre, Cleveland, following a fire in 1954.

Thanks for the ad Mike R.

I worked at the Granada, it’s last two nights of operation. Above the false ceiling were cloud machines and twinkle lights to give the impression of the lobby being outside. Behind sections of drywall, were two fountains. The balcony had several sections, including bench seats labeled for colored only.

The stage had 4 floors of dressing rooms, with small windows that could be opened to look down at the stage. The stage itself had several trap doors, and the basement was huge, with props, and rolls of posters everywhere.

The 5 May 1928 edition of Motion Picture News lists a Preston G Bradshaw as the original architect,which is also where the photos featured here are from.

Granada grand opening ad October 15th, 1927 has been uploaded in the photo section.