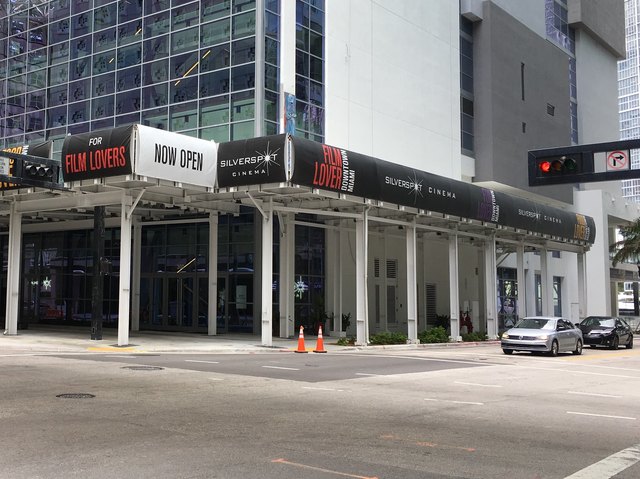 Silverspot Cinema opened its fifth US location July 14, 2018, at Met Square in downtown Miami, expanding the American presence of Cines Unidos of Venezuela.

The cinema is equipped with Barco high contrast laser projection and Dolby Atmos sound to accompany food from their Trilogy Restaurant.

Designed by iCon Architecture on six levels, the cinema features 16 auditoriums plus one with 36 recliners called The Spot, which sports a bar and lounge for private events.

Wow, the Silverspot was built on the spot where the remains of a Tequesta village were discovered and studied by archaeologists before the cinema’s construction!

Starting at 9:39 the film mentions the future of the site and the then coming building that now houses the Silverspot. (At the end don’t miss the cool use of glow sticks to illuminate the outlines of where some huts had stood that are then photographed via drone!)

From the sidewalk I once peeked in on the archaeologists working as I walked around the fenced perimeter of the property and I used to gaze down onto their work from overhead while riding past on the Metromover.

The site also inspired the book “Before the Pioneers“ by Andrew K. Frank that describes the history of the north bank of the Miami River from the earliest geologic times through the Tequesta’s habitation and up until the founding of Miami.

Along the wall of the dining area inside the Whole Foods across the street is a mural depicting Tequesta in tribute to them. (I remember years ago when that property was being developed I had heard Regal Cinemas might open a multiplex there next to the Whole Foods, then that never happened.)

When I walked by the Silverspot on September 12, 2018 I stood on the sidewalk and could peer down into the circle (not made publicly presentable yet so you currently can‘t see the postholes where a Tequesta hut had been) in the so far unoccupied southwest corner of the building. The other circle the developers promised to preserve as described in “The First Miamians” is hopefully inside the northeast corner.

Perhaps the documentary should be shown before each movie screened at the Silverspot! : )

“Luxury Movie Theater Silverspot is Now Open in Miami. Here‘s What It Looks Like.“

When I asked them how many screens were open (only eight movies in the listings), their nasty answer was “How many do you want open?”.

When I asked if this was an example of their customer service to a simple question, they blocked me.