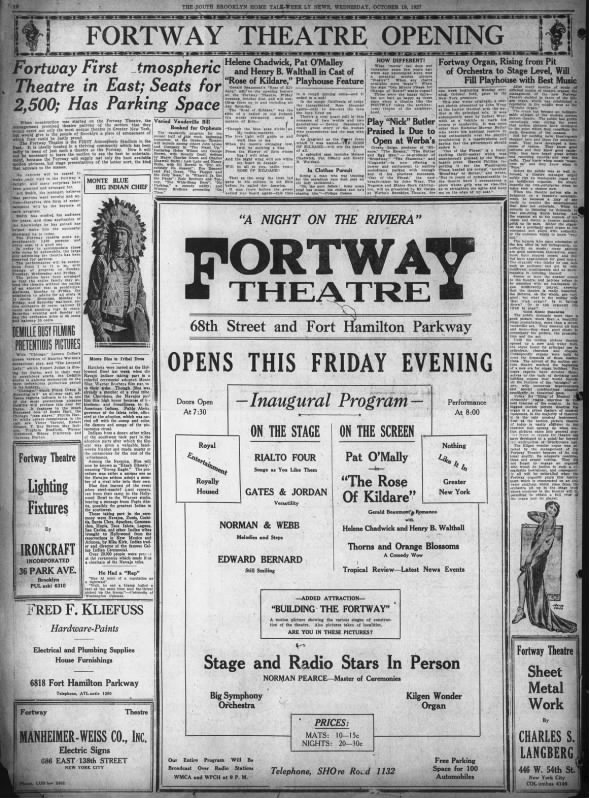 As a Five-plex I remember the main auditorium level had two smaller screens carved out on the extreme left & right side, what is the center section in the photo was the big main auditorium which sort of had the shape of a Y, there were also two theatres in the original balcony section as well. Flanking the original proscenium were these two female figures that I had taken pictures of, I will have to post it here, I nicknamed them the “Nymphs of Celluloid” I wonder whatever happened to them? There is also a photo of them in Ben Hall’s Book: The Best Remaining Seats.

That auditorium looks so wide; how was it divided for the triplex, and then where were the other two added screens?

It really is a shame it’s gone, it was a very nice theatre to catch a film. I wonder if there is anything left after it became the supermarket?

20 years ago….I was working there. The A/C constantly broke down. Even those “bad” memories are actually good memories. I really miss that place.

Nice theater in it’s day. The last time I was there, over 20 years ago, the A/C broke down, on a hot day, and those who wanted to leave, including my wife and I,
received a refund.

This theatre was equipped with 70MM film projection capabilities, which was pretty rare at the time for a nabe theatre at the time. Even towards the end of it’s existence it was still in pretty good shape and well maintained by Loews Cineplex. I think we are almost at the 10 year anniversary mark of it’s closing.

EJC513…..It’s late August and this is the first time that I’m seeing your post. I hope that the project went well and I hope that it’s still being displayed. I worked at the Fortway for a few years and I had a blast.

Hello all – I am a supervisor at the McKinley Park Library across the street from what was once known as The Fortway Theater. We are working on a historical project for the branch that will highlight the theater and its history within the community. While I have read through all the comments on this board I would love to hear from anyone willing to share their personal experiences at The Fortway, which will then be printed and posted anonymously on a display with in the branch. Thanks in advance.

Great photo. I love how the Municipal Archives have it mislabeled as Fort Hamilton Avenue. The building is on Ft. Hamilton Pkwy.

The Great Wall supermarket isn’t the only tenant in the building. Around the block on the southeast corner of 9th Av and 67th St. is the entrance to Bounce U.

The April 2010 page with the view of the Fortway as Chinese supermarket has been moved here.

I have great memories of the Fortway. I was an usher there from 1994 to 1997. I can still remember my Mom taking me to see Back to the Future there in 1985. It’s The Great Wall supermarket now. I can’t help shaking my head when I walk by the place now. I really miss the Fortway.

Just a note of correction about the identity of the organist in the photo that appears in Ben Hall’s “Best Remaining Seats” Ben had that photo, really wanted to use it for the book, but had no idea who that was seated at the Kilgen console. At the time the book was published there were two LPs released of a mysterious organist “Georges Montalba” “recorded in Nice France”. These records were made by Pianist/Organist/Arranger Bob Hunter, and were recorded at the Lorin Whitney Studios in Glendale California. I suspect Hunter was under contract with some other label and could not record under his own name, the record company put a little ballywho and BS into the labeling and marketing of the discs and off to market they went.
Ben was a pretty witty guy, loved jokes and couldn’t resist using that name for this unidentified organist from long ago.

Here is a great article about Bob Hunter, and the whole “Georges Montalba” mystery.

Thats is depressing Tinseltoes,at least they used the marquee.

Hi! I have very, very special memories about the Fortway. I was born in Brooklyn in 1963, and my mom frequently took me there. To this day, I recall seeing YOURS MINE AND OURS with Lucille Ball there – and I think MARY POPPINS when it moved to the neighborhood houses.
In 1980, I saw the re-release of MARY there as well. ANd now it’s gone!

Someone correct me if I’m wrong (and I’m quite sure someone will!) but I remember the side aisles lasted up until the end. The architecture above those aisles was removed (I think) to make room for more theatres upstairs and the staues of “The Ladies” as I called them on each side of the screen were removed as well.

How much of the original architecture remained – in the auditorium and throughout the theatre – after the multiplexing and until the Fortway closed in 2005?

That photo brings back many memories….to the far right and left of the pillars in the theatre were dark carpeted aisles where you could hide from your parents and later your friends when we were old enough to go by ourselves. I remember stealing a kiss or two from a girlfriend in those dark alleys, too!

Unfortunately not of trace of the Fortway exists in the inside of the former fiveplex, where the Great Wall Supermaket now resides. But as you can tell from VinnyBrooklyn’s photos, at least they somewhat preserved the Marquee for the supermarkets sign.