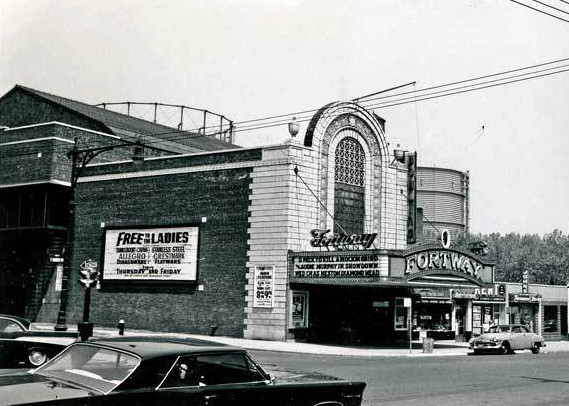 Opened on October 21 1927 with Pat O'Mally in “The Rose of Kildare” plus four acts of vaudeville on the stage. This medium sized movie theatre had a beautiful Atmospheric style interior, where electric stars used to twinkle on the dark blue ceiling. The Fortway Theatre originally had a Kilgen theatre organ. There was a small stage in front of the proscenium. The theatre was triplexed in the 1970’s, and divided into a 5-screen multiplex in 1982.

The Fortway Theatre was closed by Loews Cineplex in June of 2005, and in June 2007 it was converted into a supermarket.

Hello all – I am a supervisor at the McKinley Park Library across the street from what was once known as The Fortway Theater. We are working on a historical project for the branch that will highlight the theater and its history within the community. While I have read through all the comments on this board I would love to hear from anyone willing to share their personal experiences at The Fortway, which will then be printed and posted anonymously on a display with in the branch. Thanks in advance.

EJC513…..It’s late August and this is the first time that I’m seeing your post. I hope that the project went well and I hope that it’s still being displayed. I worked at the Fortway for a few years and I had a blast.

This theatre was equipped with 70MM film projection capabilities, which was pretty rare at the time for a nabe theatre at the time. Even towards the end of it’s existence it was still in pretty good shape and well maintained by Loews Cineplex. I think we are almost at the 10 year anniversary mark of it’s closing.

Nice theater in it’s day. The last time I was there, over 20 years ago, the A/C broke down, on a hot day, and those who wanted to leave, including my wife and I,
received a refund.

20 years ago….I was working there. The A/C constantly broke down. Even those “bad” memories are actually good memories. I really miss that place.

It really is a shame it’s gone, it was a very nice theatre to catch a film. I wonder if there is anything left after it became the supermarket?

That auditorium looks so wide; how was it divided for the triplex, and then where were the other two added screens?

As a Five-plex I remember the main auditorium level had two smaller screens carved out on the extreme left & right side, what is the center section in the photo was the big main auditorium which sort of had the shape of a Y, there were also two theatres in the original balcony section as well. Flanking the original proscenium were these two female figures that I had taken pictures of, I will have to post it here, I nicknamed them the “Nymphs of Celluloid” I wonder whatever happened to them? There is also a photo of them in Ben Hall’s Book: The Best Remaining Seats.