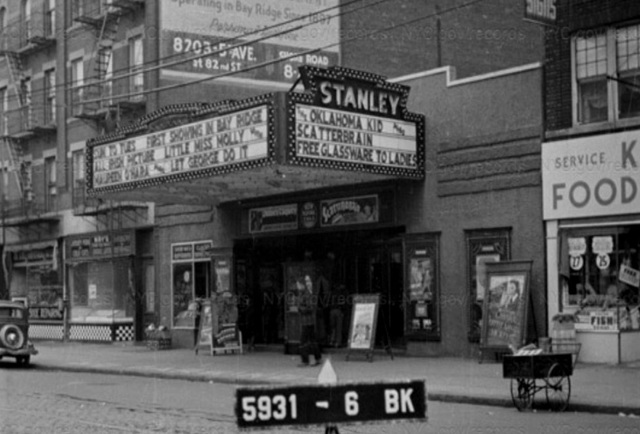 Built in 1933, on the site of the Colonial Theatre(1910-1932). The Stanley Theatre occupied a narrow space on the east side of Brooklyn’s 5th Avenue between 74th and 75th Streets. Its Art Deco style design featured a dark burgundy granite exterior with a jazzy marquee framed in running yellow lights around a red neon Stanley name plate.

It was an independent theater and received the very last run of current double features in the 1940’s and 1950’s. (In its Bay Ridge neighborhood, Loew’s Alpine Theatre and the RKO Dyker Theatre got the product first, which then funneled to Loew’s Bay Ridge Theatre, the RKO Shore Road Theatre, Interboro’s Harbor Theatre, the Fortway Theatre, and then finally the Stanley Theatre.)

The lobby was a small clearing space with a ticket taker who stood just steps from the exterior box office. Past the doors sat a candy-seller at a small dimly-lit stand. The house was otherwise cheerfully lit with blue Art Deco style side-wall fixtures, and the walls were covered with pale-blue drapes. Designed for sound-films, the proscenium was just high enough to accommodate a standard-ratio screen at approximately 9 by 12' and just wide enough to accommodate the later CinemaScope screen at approximately 9 by 22', its 1950s' wide-screen might have measured 9 by 15'. The sleek proscenium sidewalls curved in to meet the CinemaScope screen. Before that innovation, pale blue curtains draped the picture, with just a thin mask surrounding the screen. Even with the larger format, however, there was still enough room for a travelling curtain to operate. The seating area held a wide center-section (about twelve seats) and narrower right-and-left side sections (about six-to-eight seats each). A shallow balcony held at most six or seven rows for those who smoked.

Because the house was so small, the projection appeared bright and crisp and the sound carried no echoes. But because the films arrived literally at the end of the line, their prints were often scratched with lines and mended with splices. Kids who filled the orchestra for Saturday matinees didn’t mind. And in an age before VCR and DVD, movie enthusiasts welcomed the chance to catch a film before it disappeared forever. Prices, too, were a few nickles cheaper than at the Alpine Theatre or Dyker Theatre. Each double-feature played three days (Wednesday through Friday from the RKO chain, and Saturday through Monday from the Loew’s chain), with a lay-over on Tuesday that presented a recent revival double-bill (“Last chance to see … now together on the same program … at regular prices!”).

I recall that its very last show featured the Bergman/Brynner/Hayes “Anastasia” on March 11, 1957. Located next to the Lincoln Savings Bank, the Stanley Theatre became a supermarket, but in recent years has become and Apple Bank.

Warren—
thanks for a rapid posting— all my remarks come from memory, so test them out. But you got the exact address right, AND the exact number of seats (my guess was good, huh?). We would have thought that “Stanley” spelled “Warner” circuit, but my hunch is that it had no connections—it was too small and idiosyncratic for circuitry. The Stanley had a mate, the Electra on 3rd Avenue and 75 Street. The latter was known as “the first motion picture theater in Bay Ridge, built in 1913.” By the ‘50s, the Electra was so independent that it showed pictures at an erratic schedule—recent product alternated with revivals and with foreign films (which none of the locals attended). I remember “Breaking Through the Sound Barrier”(Dab=vid Lean’s '52 paean to modernity) ans “Bonnie Prince Charlie” (with David Niven as trhe imposter) and “Man in the Dinghy” (everybody wondered who Liz Taylor’s new husband was, so they showed this Michael Wilding feature) and “La Ronde” (Ophuls! Ophu;s! Ophjus!) (in my youth, I pronounced the title as “La ROD-ne”) showed there. I guess that’s why it closed around '53, before wide-screen came in.

I remember seeing “The Man With a Golden Arm” at the Stanley, at the age of fourteen, sitting in the balcony smoking cigarettes, thinking “Hey, this is great: this picture doesn’t have a Production Code Seal.” Who among us would today smoke cigarettes?

Warren—
You are exactly right again—I just located a cryptic statement that “The Stanley Theater was built in the 1920s as the Colonial Theater,” along with a photo of it(advertising “Up in Arms” on the marquee, therefore datable to late Spring ‘44),in Brian Merlis and Lee A. Rosenzweig, Brooklyn’s Bay Ridge and Fort Hamilton: A Photographic Journey, 1870-1970 (Brooklyn: Israelowitz Publishing, 1970), p. 126. The Stanley at 2075 86 Street was in the vicinity of the Bensonhurst Theater and Loew’s Oriental, no?, which doubtless overtook the area’s nickelodeons. Thanks for the bibliographical info about the Film Daily Yearbook—gotta take a look at those volumes.

â€œThe Racers,â€ â€œThe Country Girl,â€ and â€œJupiterâ€™s Darlingâ€ with their co-features were arriving at the Stanley at the very end of their initial release, as the first booking had already traveled through the RKO circuit and the other two through the Loewâ€™s circuit. The remaining features were all revivals or â€œreturn engagementsâ€ of films ranging from one to ten or more years old. In the age before VCR or DVD, the Stanley was a great place to catch up on classics.

Hereâ€™s a photo of the Stanley in 1944. It comes from Brian Merlis and Lee A. Rosenzweig, â€œBrooklynâ€™s Bay Ridge and Fort Hamilton: A Photographic Journeyâ€ (Brooklyn: Israelowitz Publishing, 2000), p. 126.

The double feature on the marquee lists â€œUp in Armsâ€ and â€œYellow Canary.â€ Since the Danny Kaye feature opened at RCMH on 2 March of that year, the photo was likely shot in the following May or June.

There is a photo of the current site of the Stanley Theater on “ Bay Ridge Blog”
www.bayridgebrooklyn.blogspot.com

I may have seen the closed marquee of this theater, which would have to be in the 1960s ; I definitely did see it as a supermarket in the late 1960s and later on remember a Chase Manhattan Bank at this site.

Thanks for the update and the news that Apple Bank has replaced the supermarket that replaced the theater. The photo shows that the bank has completely modernized the building, replacing the red granite exterior with apparent stonework.

I don’t believe that the marquee remained in the early ‘60s. The theater’s transformation into a supermarket occurred fairly rapidly after the theater closed in Spring '57. At least at that time, property in this area did not remain vacant for long.