Standing between 4th Avenue and 5th Avenue on 86th Street, the once grand Shore Road Theatre was originally opened by the Levine Brothers on March 15, 1924 with Lionel Barrymore in “The Unseeing Eye”. It was equipped with a 2 manual Marr & Colton organ. Last operated by RKO, it was closed in 1951 and has been used for retail for decades.

It once housed a disco and then the Wiz took over. But recently the electronics chain closed the store in a cost-cutting move, and it now sits waiting for a new retail use.

The New York Times has an online feature comparing tax photos of twelve properties taken by the City in the 1930s and 1980s with photos taken today. The evolution of the RKO Shore Road is included

With the massive expansion of the Century 21 department store over to 87th St., it is surprising that the store management did not take over this retail space.

Anyone know why this theatre is listed as a former Loews house?

The Shore theater was LANDMARKED yesterday by the city of New York! What great news for the city, for Brooklyn and especially, for Coney Island! I really think that a restored palace could actually do well is this fast rising entertainment center; especially of the concert variety. Hopefully, others will share that vision and make it happen.

mp775-Great link! My first time ever seeing a photo of the RKO Shore Road. I have to be honest. When I did the scroll through the 1980’s shot blew me away too. I almost forgot about the “Martin Paint” and “fayva” shoe store. When I was a young kid durning the 80’s I never realized that building was once a movie theater. I could always tell by looking at the building up the block (The RKO Dyker) that it once was a movie theater.

I notice that this theatre is now a Foot Locker, Also the Loew’s in Montreal. 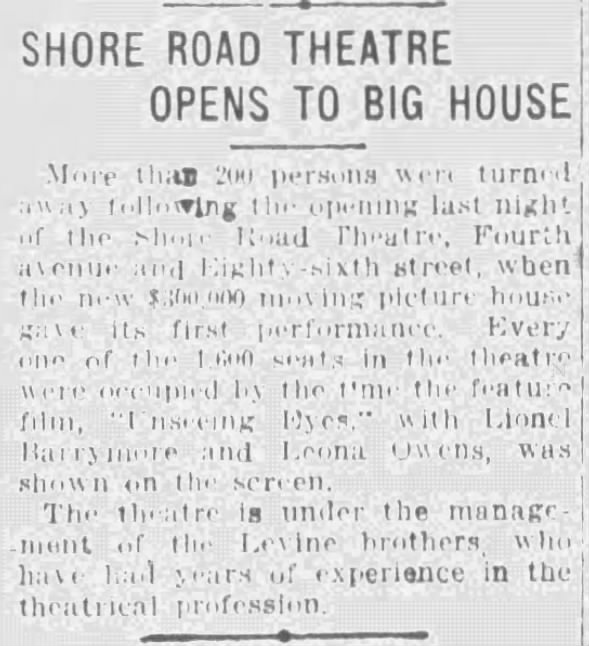 The Shore Road Theatre was once operated by 56-year-old Andrew Lo Blanco, who took his own life by shooting himself in the mouth with a .30-.30 caliber rifle after stabbing his 38-year-old wife Mary Lo Blanco (a sales worker at Abraham & Straus) with a hunting knife 20 times in the chest to death at their home of 1158 83rd Street of Brooklyn on July 30, 1949. The NYPD investigated a note shortly after finding the body of Mary lying on the floor of the hallway, reading “I can’t stand the disgrace which you have caused the family by running with other men”. Neighbors nearby said that they did not heard anything at all, not even a single gunshot from Andrew’s suicide. Andrew telephoned Mary, who was at her sister’s house, Molly Archetetto, at 754 Bushwick Avenue, when Andrew told her on the phone “If you don’t hear from me by 11:00, get the police and come to the house”. After the discovery of the tragedy, she told NYPD that her brother had left something at the house earlier that day with a rifle wrapped inside a newspaper. He told her that he was going to try a reconciliation with his wife. The family had two other children, who were adults at the time of the incident. Robert (who was part of Brooklyn Tech) and Andre, were working part-time at a nearby grocery store of 7116 13th Avenue around the time Andrew committed suicide.