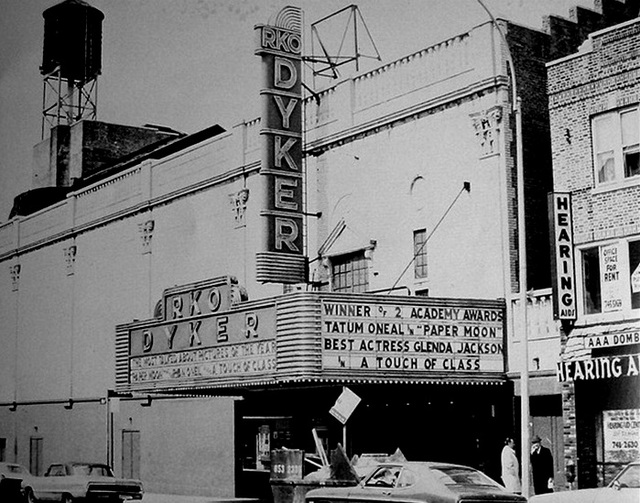 The Dyker Theater was opened on November 26, 1926 with Donald Keith in “The Plastic Age” plus vaudeville on the stage. It was equipped with a Marr & Colton 3 manual 11 ranks organ. In 1928, it was leased to RKO, who operated the theatre for the remainder of its cinematic life. Closed in March 1977 with Gene Hackman in “The Domino Principle”, the RKO Dyker Theatre was converted into retail space.

Modell’s is on the balcony level. Take the escalator up and you will be amazed to see the repainted auditorium ceiling, upper proscenium and upper side walls have been integrated into the store.

The vertical sign stills butts the façade, although it now says Radio Shack, its other occupant.

Many thanks for posting the NYT ad for 8 Feb ‘49. Perhaps my memory played tricks in my post of 1 Sept 2005 above— There I recounted a “Stage Party” with an in-person Olsen and Johnson somewhat later that year (associated with a revival of the filmed “Hellzapoppin” that summer and a live O'n'J extravaganza at Madison Sq Garden). But the Tuesday crossover “Laugh Day” with “Crazy House” matches my account as well (sans O'n'J in the “Stage Party”).

I consulted the full-page NYT for 8 Feb ‘49 and was amazed to see how many other films that I saw as a kid were playing that season— “The Paleface” (and “Sealed Verdict”), “Three Musketeers” (and “Mickey”), “Julia Misbehaves” (and “Ruthless”), “Loves of Carmen,” “A Letter to Three Wives,” “Command Decision,” “So Dear to My Heart,” “Down to the Sea in Ships”— Over a period of months my folks took me to see them at various neighboorhood theaters (the RKO Shore Road, Loew’s Alpline and Bay Ridge, the Stanley), but three of them I recall seeing with them on B'way— “John Loves Mary” with Jack Carson on stage at the Strand; “The Bribe” with Arthur Godfrey on stage at the Capitol, and “Joan of Arc” at the Victoria. Our legs must have been run off from attending so much.

My point is not to wax nostalgic about these events (I could bore this page with details about each) but to remark about how common movie-going was in those days, both at the nabes and via hour-long subway rides to Times Square. My family’s penchant for that was not unusual—I remember that other kids my age attended at least as many movies and some even a lot more, with regular weekly seatings at the nabes regardless of what was playing (my experience was comparatively selective, bolstered by compulsive reading of ads and reviews and my pint-sized contempt for critical flops; also, despite my protests, my folks would not take me to see “The Snake Pit,” “Road House,” He Walked by Night,“ or "Force of Evil”).

Where did anyone find so much time to do this? Our jaunts to Times Sq invariably took place on Saturday or holiday mornings (reduced prices before noon). February brought a number of holidays— including the post-war “Coal Week” which closed the schools for ten days to save energy (today we ought to close the schools to save kids from standardized testing). Over-crowded space also meant that the lower grades attended half-day sessions to share classrooms expeditiously. In ‘49 I endured the second grade in morning sessions, and I recall my mom often meeting me afterwards and then walking to the RKO Dyker for afternoon shows (with a bag of home-made sandwiches for nourishment). As my dad worked around-the-clock, he’d often join us. The “Stage Party” beginning at 3:00 pm makes sense.

This account might seem incomprehensible to a generation that views most of its films on DVD— though that medium brings its pleasures too.

Funny memory about the RKO Dyker: I lived in Dyker Heights but attended the
H.S. of Art & Design in the city. Anyway, I needed a convenient ‘hideout’ one day,
to kill some time (& school wasn’t it) so as soon as the Dyker opened, I made a
hasty entry, oversized zippered art portfolio in tow. As I passed 2 uniformed
ushers I overheard them saying – “I dunno – maybe he’s got a pizza in that thing."
LOL! I never forgot that & always think of the Dyker when I see one of those
leather portfolios.

I just got turned on to this wonderful site. My wife’s father and uncle owned the luncheonette next to the Dyker. Their names were Arthur and Bernie Faber. I got to believe that some of you commenters stopped in for an eggcream. Any memories would be greatly appeciated.

On 27 January 1951, Bela “Dracula” Lugosi presented his in person Horror and Magic Stage show at RKO Dyker. Currently I am conducting research on all things Lugosi; if anyone out there actually saw this show and/or has memorabilia (poster, handbill, photos) related to this show, please contact Bill at Thanks in advance for any assistance!

I am deeply touched to learn that my Bela played the Dyker ! Bela in Brooklyn !!!

Hello Lugosi Research, For whatever it’s worth, Bela presented his Horror and Magic show at the RKO Capitol on Broad Street in Trenton (NJ) around that time. Google it as I believe I read about it in the Trenton Times newspaper.
Good luck. 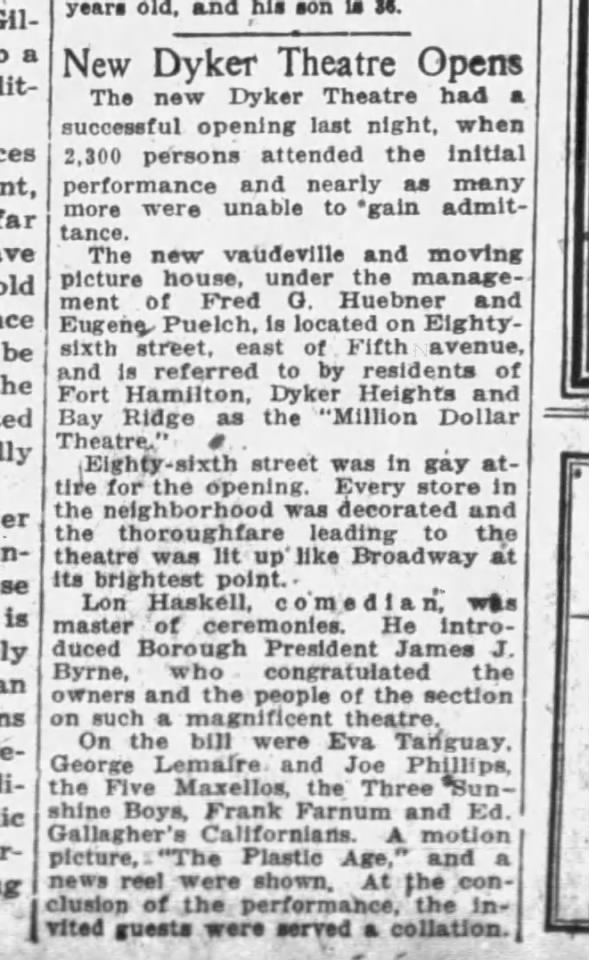