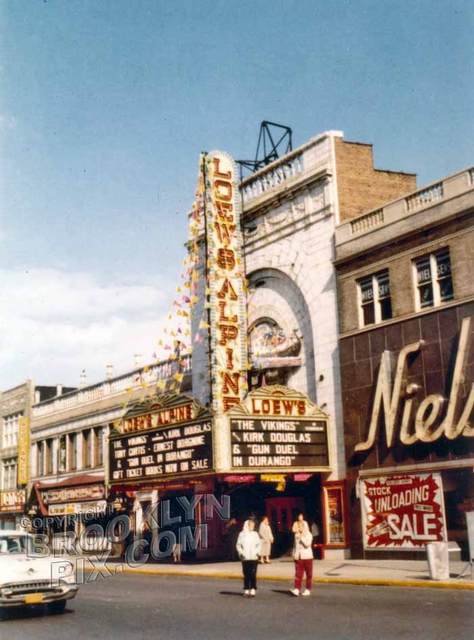 The Alpine Theatre in Bay Ridge, Brooklyn, was opened on June 6, 1921 by Loew’s Inc. The opening program was Paramount’s “City of Silent Men” plus shorts and a newsreel. Music was provided by a resident orchestra of twelve, including an organist. The admission price was 15 cents for weekday matinees and 25 cents at night and all day on Saturday & Sunday. Its building cost, according to Variety of June 10, 1921, was $420,000, including the real estate. Carlson & Wiseman were the architects.

At the time, the Alpine Theatre was the first Loew’s theatre anywhere with its entire seating capacity (2,200) on one floor, without a balcony or gallery. The tapered auditorium was 100 feet at its widest, with the last of the 55 rows of seats about 76 feet from the screen. The stage had no fly gallery or grid-iron, but had an apron just large enough to accommodate a vocalist or musical instrumentalist between film showings. Variety described the Alpine Theatre’s interior as “decorated in a tan and gold color scheme, the general atmosphere created being one of brightness. The side walls are panelled and painted in an imitation of tapestry. The floors are carpeted with red velvet. A good system of floor pitch gives a clear view of the screen from any part of the house.

The Alpine Theatre was twinned on November 13, 1976 and was converted into seven screens on January 17 1986. Loew’s sold the theatre to Golden Theatres in fall of 1986. By 2015 an eighth screen had been added. It is independently operated.

its nice the owner of this theater is using the down time to upgrade this theater. so the oldest continually operated movie theater in NYC will be it tip top shape when it re-opens. I hope other theater owners are doing likewise.

There was a piece on channel 4 during the 6 - 6:30 news segment about this theater. One very cool find during renovations was the discovery of some original light fixtures. They are being rest Of and reinstalled.

For those of you with access to films at Kanopy.com you can watch Abel Ferrara’s The Projectionist, mentioned in the NYT link in CC’s Oct 29, 2020 post. Numerous shots of vintage Times Sq theaters and other NYC theaters (including the Alpine) owned by Nick Nicolau.

Mobster scum had nothing to do with the Alpine. Those criminal scumbags were the owners before Cineplex took the over the Fortway.

The Alpine Cinema recently celebrated it’s 100th Birthday this past Sunday June 6th 2021, they say that at this point it’s now the oldest continually operating movie theatre in all of New York City: https://www.brooklynpaper.com/alpine-cinemas-reopens-centennial/

now at 100 years old one wonders how this theater survived while other neighborhood theaters didn’t. for instance the Coliseum at Bway and 181 St.in Manhattan would have bested this theater by a year as the oldest continually operating movie theater in all of NYC if hadn’t been demolished last year. groups tried to save the theater but weren’t able to.

Spectrum’s “Mornings on 1” is doing a week-long feature on Bay Ridge. Mentioned the Alpine as the longest continuously running movie house in the five boroughs.

The owner of the theater is very dedicated and has made it a wonderful place to see a movie. Make sure to come down to this cinema treasure soon gonna be celebrating 102 years in business the movie business