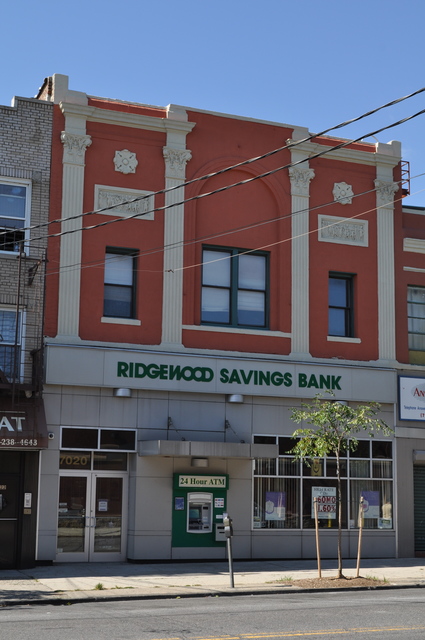 Situated in the Dyker Heights section of Brooklyn, the Endicott Theatre was opened in 1927. It was equipped with a Kimball 3 manual, 8 rank organ. The theatre was the flagship of the Endicott Circuit, which also had its headquarters in the building. In “the old days”, the circuit was never more than minor-league, running only late-run houses in Brooklyn and Queens/Long Island.

In 1945, besides the Endicott Theatre, they included the Avon Theatre, Garfield Theatre, Hollywood Theatre, Metro Theatre, 16th Street Theatre and Sun Theatre, all in Brooklyn; the Boardwalk Theatre in Arverne, the Edgemere Theatre in Edgemere, and the New Theatre and Rivoli Theatre in Rockaway Beach.

The building is still standing and it looks like it’s last occupant, a drug store has gone out of business (GOOD!). The exterior still retains the theatre’s terra cotta and the building and stores attached to the building are for rent.

Poster By Theaterat for PhilPhil 4 6 05.The Endicott was a plain but well kept and pleasant neighborhood theater. The inside was painted in light blue and gray. There were 3 blocks of seats. There was a stairway in the lobby, bur rtere was no balcony. It probably led to the projection room. When I was 10, I remember seeing Captain Horatio Hornblower there with my parents. Excellent movie, but Gregory Peck did not seem British enough!I also saw From Here To Eternity there with my mother. The Endicott had an excellent air conditioning system and it was a good place to kill a hot afternoon in the summer. There was a woman usher who would call the manager to eject unruly kids. Every Saturday the theater would have a kids matinee.There were always 2 movies and abour 5 cartoons. I would meet my friends at the candy store accross the street, and we would go to the show We got to know the usher, and she would hold our favorite seats for us until we arrived. Soon, we started to call ourselves the Endicott Theater Boys.Those old Saturday matinees were marvelous!THere would be 2 Westerns, 2 horror movies 2 comedies 2 adventure or war movies, or 2 Si Fis. My favorites were the Si Fis, movies like RocketshipXM, The War OF The Worlds,When Worlds Collide< Beast From 20,000 Fathoms,This Island Earth, etc. The fun ended in 1957. I believe the last movie they showed was The Man Who Knew Too Much with Jimmy Stewart. Shortly after that, the Endicott Theater Boys had to find a new theater to go to.Theaterat tells me the building still stands, and it is for rent.

This theater closed way before my time (I was born in ‘61), but my dad told us how he used to frequent it as a boy. Especially when we would watch The Four Feathers (the Alexander Korda, definitive version) and he told us when he saw it at the Endicott for a dime! After reading PhilPhil’s message and the list of SF classics that played there, I can tell this would have been my kind of theater!
The earliest business I remember there was a Bohack supermarket. It later became a Genovese drugstore, though that chain was bought out by Eckerd, which closed the store and opened a larger store across 13th Avenue. There are a couple other businesses there now but I don’t remember them, as I only passed the place briefly a few weeks ago. Fortunately most of the facade is intact. I would love to find photos of the place, if any exist.

My father’s uncle managed the Endicott in the 1920’s and 1930’s at least and possibly longer. I know very little about him or the place and would love to find out more.

i work in the office building on top of where the endicott used to be. Where the theater used to be is now a Ridgewood Bank just opened about a year and half ago. my boss has a picture of what the movie theater looked like from the outside back in 50’s pretty cool

As a boy I went to the Endicott theatre every saturday afternoon to watch a double bill, cartoons and an entire day of Abbot & Costello. On weekends they gave out dishes that your mother collected everytime you went to the movies to create an entire set. The best moments were when someone dropped a dish and it shattered. That’s when the entire theatre erupted in applause and laughed. Sometimes that happened 4 or 5 times a show! It was better than the movie.
vince marrapodi

When I was in High School in the mid 90’s there was an active wear clothing store that took up part of the building.