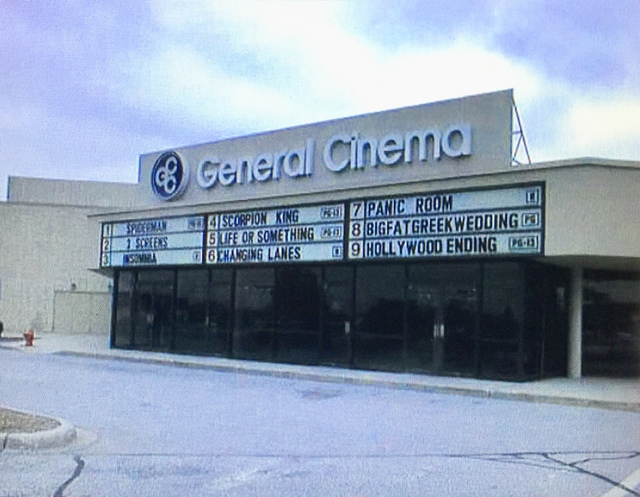 General Cinema opened this four screen theater December 15, 1978. This was the first theater to be built in Northwest Indiana that wasn’t a single or twin so excitement was high. The theater was just east of the relatively new Southlake Mall. It’s opening attractions were “Superman” (on two screens), “Lord of the Rings” (the lousy animated version), and “King of the Gypsies”. The theater was an instant success and became General Cinema’s highest grossing theater in the country.

On May 24, 1985 General Cinema added five screens on and re-did the entire lobby without ever closing its doors. The five theaters were small in size but it gave them the opporutnity to put a hit film on more then one screen. In 1991 Loews opened the Merrillville ten screen multiplex right across the street which cut into business some. Several miles away in Schererville, Kerasotes opened the Showplace 16 in 1994 which also took away some business.

The Southlake Cinema was closed in January 2006 and was demolished later that year.

Southlake Cinema closed its doors after evening showings on Sunday the 15th of this month. Other then a small mention in the paper and the marquee, which this last weekend read: Thanks for 27 Great Years, there was little fanfare. Back in the early 80’s Southlake was GCC’s highest grossing theater in the country. Having worked there for 4 years I saw many a movie there including “Superman”, “An Officer and A Gentleman”, “Ghost Story”, “The Shining”, “1941”, “Porky’s”, “Blue Thunder”, “Ghostbusters”, “The Thing” and the list goes on and on. Apparently the cinema is going to be torn down as Kerasotes is building a new mulitplex down the road withing the property of the mall (now known as Westfield). At least two restaurants will be built on the site of the former theater with an indoor walkway connected to the new theaters.

Where did you find all of that? I was shocked when I arrived last week and they were closed. Any idea how long before the new one opens?

I was at Southlake Cinema today and I read the small mention in the marquee. It read like this: “Thanks for a Great 27 Years, AMC Staff. Closed. December 15th, 1978 to January 15th, 2006”. December 15th, 1978 was the day the Southlake Cinema theater opened, right? Just to make sure you got the right date, please check your calendar and then get back to me as soon as possible. Thank you.

JMW – The new theaters are expected to be open by summer. Adam – The December 15, 1978 opening date is correct.

Southlake Cinema has been demolished. Apparently they are in a hurry to get started on the replacement restaurants that will be going up as the new multiplex, which is just South of the old theater looks to be coming along.

Jerry Lynn, the man who worked security for this theater (and occasionally the other GCC’s in the area) for the midnight shows from the theater’s inception until midnight movies became passe in the 1990’s, died Easter Sunday, April 4, at the age of 59. Jerry was a big brutish looking man who had the heart of a ten year old. He was one of the nicest men I ever knew. He would confiscate beer and then split it with the ushers at the end of the night. After the midnight show we would eat at Around The Clock or Denny’s together. Southlake Cinema wouldn’t have been the same without his presence at those shows. The worst was for AC/DC’s “Let There Be Rock.” It was such a nightmare to work that GCC pulled it from any further midnight showings after too many problems nationwide occured the first weekend. We were no exception. People getting sick, threatening violence against the staff and those who didn’t get in threatening to damage the building and the cars in the lot. Jerry took it all in stride but got tough when he had to. You will be missed my friend but keep the beer cold and the cheeseburgers warm. R.I.P.

The Southlake Cinema was demolished in 2006.

This opened on December 15th, 1978. Grand opening ad in the photo section.