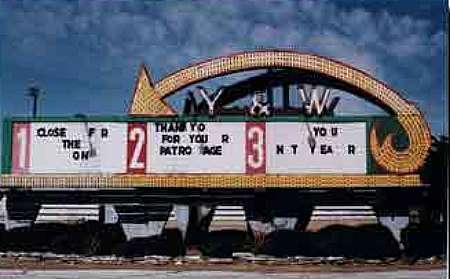 Located in the township of Merrillville near Gary, IN. The Y & W Drive-In opened as a single screen May 29, 1953, just off of the main strip in the town. It’s large sign could be sign for blocks when lit up. The first screen could hold 940 cars. There was a playground on the grounds which included a small zoo which mostly had monkeys.

Every Friday night through the late-1970’s screen 1 would have lucky Banko which was basically bingo. You got your card when you bought your ticket and at intermission an announcer would read off numbers over the speakers. Play continued until all the prizes were handed out. The prizes weren’t extravagent but my one time as a winner won me a coffee maker which lasted for years.

In 1971 a decidedly smaller second screen was opened to the south of screen 1 which held 500 cars. When passing the drive-in on Broadway you could easily see the movies on each screen. The drive-in was hugely popular and even stayed open all year around through 1978. Every holiday there was a terrific fireworks show. Every New Year’s Eve screen 1 would have a dusk to dawn show with free coffee, donuts, and passes to the few who managed to make it through the night.

In 1981, a third and much smaller screen opened right behind screen 2 and held 300 cars. Still again the third screen was far enough back that you could see it from Broadway. Up until the late-1980’s each screen presented a triple feature each Friday and Saturday and a double feature the rest of the week during the season. I can remember a great triple feature of “Aliens”, “The Fly”, and “Fright Night”.

In the 1990’s, attendance had dwindled badly and gang activity had increased. After the 1997 season the Y & W closed for good. In the winter of 2002 I snuck onto the grounds one night and took a tour. The theater is in terrible condition. Weeds in screen 2 are almost five feet high and the other two screens have weeds everywhere as well. Screen 2 is peeling badly though screens 1 and 3 looked remarkably intact. The two concession stands and all three projectionist booths were badly damaged by vandals.

In 2002, the marquee was sold and removed and every time I drive by it breaks my heart to see how badly it looks. Sadly it would probably cost much too much to renovate but there is always hope.

One comment about Indiana Drive-ins. There was the Dunes Drive-in in Lake Station (East Gary) Indiana. Saw the Shining there. Got a great teenage story that happened at the Dunes: A car-load of us guys went to the movies and as a car-load of guys often did, we were misbehaving. Someone at the concession stand called the Lake Station Police on us. We know this because a friend ran back to our car and tipped us off. We saw the Police car pull up at the concesion stand and then take off like a bullet for our car, but a funny thing happened on the way. He smacked right into a speaker pole going about 30mph. across the parking lot. He never made it to our car. OOPS!

I grew up in Merrillville, and I was sad to see the Y&W go after all these years. During the summer months.. for years.. I’ve always gone there every Friday night to see movies. They would always show 2 movies… than the first one a 3rd time.. I loved it!

The sign was spectacular! I wish I had a photo of it… it’s one of my biggest regrets.. never getting a picture of it.

I grew up in Hobart and frequented the Y&W throughout the 80’s and early 90’s. It was heartbreaking watching it steadily decline. Some of my fondest childhood memories were there. I remember when the train and carousel were still running and seeing movies like E.T., Explorers, The Fly, The first Batman movie, Jurassic Park….and I think the first movie I saw there was Clash of the Titans..so that was probably 70’s? We take our children now to the single screen 49er drive-in in Valpo…not the same..but all that’s left here in NWI. Some night’s it sells out an hour before dusk and it’s such a shame there is no where else to go :–(

I’m so happy to have found this website about Y&W. I hope that several will see my post and may be able to help me. I’m looking for additional information on the carousel that used to operate at the drive-in. In the last 90s, I was able to purchase one of the horses off the carousel. It was in very rough shape. We had it restored and I’m now hoping to find some memorabilia from the Y&W to hang on the wall next to it. Does anyone know if there were tickets or tokens to ride the carousel? If so, does anyone have one? I’m also looking for any program or brochure or anything like that mentions the carousel as well as photos of when it was up and running. Thank you for any help you can provide!

There’s a picture of a drive in booth in some Strong Electric ads from around 1960 showing Strong Jetarc lamps. Could this be the Y&W booth?

Here is an article on a current exhibit on the Y&W. Copy and paste the link, or search “nwi.com Y&W drive-in”.