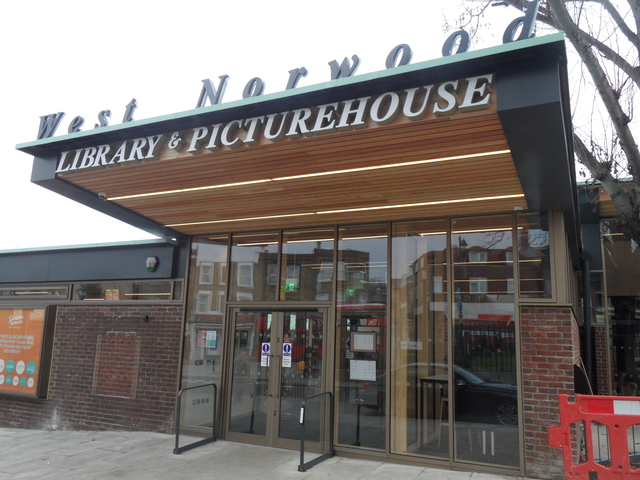 Frederick Nettlefold (1833-1913) was an industrialist, one of the Nettlefolds in Guest, Keen & Nettlefolds(now the multi-national aerospace and automotive components company GKN). He was also a noted philanthropist, and he donated the land on which the West Norwood Free Public Library, which had been commissioned by Sir Henry Tate, was built, with Frederick laying the foundation stone on 26th November 1887. The building was designed by Sidney Smith, architect of the Tate Britain Art Gallery and several other libraries in the Borough of Lambeth. When it opened on 21st July 1888, it was the first public library in the Borough of Lambeth.

On 12th April 1969, following reconstruction and enlaregment, a new library and Nettlefold Hall, designed by borough architect Ted Hollamby, were opened by HRH The Princess Margaret.

Sadly both buildings were forced to close after thieves stole the copper roof in June 2011.

In August 2015, plans were submitted for a joint venture between Picturhouse Cinemas and Lambeth Couth which would see the transformation of the buildings into a four screen cinema and a re-born library/community space, complete with a bar and cafe.

Project and cost managed by W. Hiles Partnership, on behalf of Picturehouse Cinemas, this scheme, a joint venture between Picturehouse Cinemas and Lambeth Council, saw the transformation of an award-winning 1969 West Norwood Library into a four screen cinema and reborn library/community space, complete with bar and cafe.

The plans were originally submitted in August 2015, with work to have been completed by November 2017. Aside from any construction delays, a thorny issue has been the London Living Wage, which Lambeth Council proudly pays, but which Picturehouse Cinemas has been in dispute with its staff about, principally at their Ritzy Picturehouse in nearby Brixton.

Happily, with the library already open, the cinema finally opened on Friday 9th November 2018, with these films spread over the four screens: “Bohemian Rhapsody”, “Widows”, “A Star Is Born”, “Peterloo”, “The Hate U Give”, “Wildlife”, “They Shall Not Grow Old” and “The Wife”.

The seating capacities, generous by contemporary standards are:Screen 1: 223, Screen 2: 129, Screen 3: 132 and Screen 4: 78. Screen 1 occupies the former Nettlefold Hall, with its distinctive shaped ceiling and exposed metalwork. A historic photograph is on display outside the auditorium, and below the Screen 1 signage is a plaque commemorating the filming in the Hall, of a scene from Stanly Kubrick’s controversial 1971 drama “A Clockwork Orange”. In a nice extra commemoration, in the auditorium, among the predominantly silver coloured seats as some in orange!