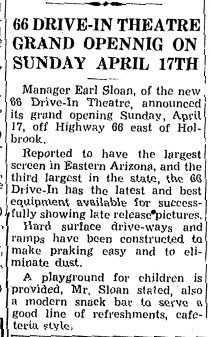 Located at 102 Hermosa Drive (now renamed), the 66 Drive-In was opened on April 17, 1955 when it was operated by Harry L. Nace Theatres. It was closed around 1961. There was another drive-in theatre, the Western Star Drive-In, across the street from this drive-in. The site is now an empty field. All that remains of this drive-in theatre is the shape which is very very faint.

Daniel is right. There were two drive-ins almost across Route 66 from each other, according to Historic Aerials' topo maps. The 1957-69 maps all show that one was due south of the airport at the end(!) of Hermosa Drive east of Route 66, and from Daniel’s description, I’ll guess it’s the 66. The other was on the west side of Route 66 just south of Hermosa, matching where Daniel says the Indian Drive-In had been.

The 1955-56 Theatre Catalog lists only the 66 for Holbrook. It showed capacity 400, owner Harry L. Nace. The Motion Picture Almanac series first mentioned it in its 1956 edition, capacity 300, owner Harry Nace. It stayed that way through the 1959 edition, then dropped off the list in 1960, never to return. Did it close so soon, or did it get overlooked?

The July 17, 1955 Arizona Republic included Holbrook’s 66 Drive-In in a movie ad with lots of out-of-town theaters. The 66 was showing Saskatchewan, starring Shelley Winters.

More clues from the Arizona Republic.

The Feb, 16, 1955 issue reports big plans for plenty of new drive-in construction “by Harry L. Nace Jr., president of the state-wide movie-house chain.” After leading with the Phoenix-area plans, the article adds “Other new theater sites are: San Manuel, Holbrook, Kingman, Clifton-Morenci, Tempe, and Goodyear. Construction on all will begin this year, and all will be equipped with 96x45-foot screens, Nace said.”

Construction was either already underway or went fast, because the 66 first appeared in the ad for various Nace Circuit theaters just two months later on April 17, 1955. The 66 continued to be included through at least August 1956.

An April 5, 1957 article datelined Flagstaff mentioned Nace holdings in Flagstaff and Winslow but didn’t mention Holbrook. The June 21, 1957 Nace ad also does not include the 66 or any other drive-in for Holbrook, just the indoor Roxy. Perhaps Nace sold the 66, or perhaps it just closed.

Just got back from Holbrook, where I spent a few hours in the local library trying to untangle this story.

First, it turns out that the 66 was the one on the west side of the highway. The Western Star’s location was mentioned a couple of different ways as east of the highway, which leaves the only other position for the 66.

Second, the 66 had its grand opening on April 17, 1955 according to the local paper. It survived until at least the opening of the 1957 drive-in season, based on ads in that paper.

I just saw an aerial taken Oct. 5, 1959 (sorry, can’t post it yet) that shows the 66 looking very active. And that reminded me to check another section of those Motion Picture Almanacs.

Harry L. Nace Theatres still included the 66 among its holdings in the 1960-61 MPA Theatre Circuits sections even though the drive-in was off the list in the drive-in lists for those years. The Nace list didn’t include the 66 in 1962, and the January 1964 aerial I just posted showed the screen was gone by then, but it’s possible the drive-in lasted till 1961 or so.