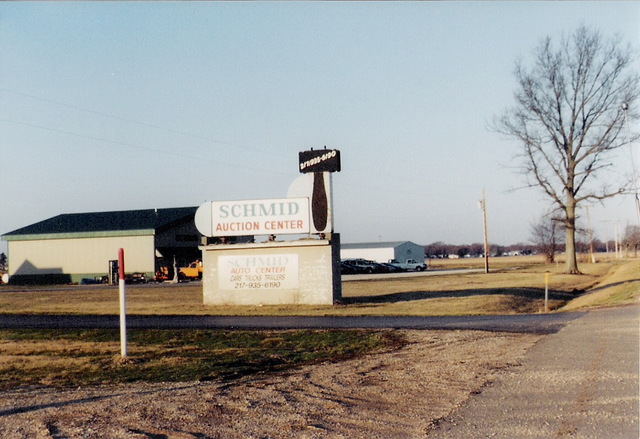 Opened on September 6, 1950 with Charles Bickford in “Guilty of Treason”. The Family Drive-In was located along Highway 54 East and could accommodate over 450 cars. It was later renamed McCollum’s Outdoor Theater and in 1953 was renamed Clinton Outdoor Theater.

The concession booth and marquee still survive, used by an auction service which operated on the former drive-in site.

The Clinton Outdoor Theater was owned by Jense Nelson when I was growing up in Clinton. He also owned and operated the Clintonia Theater in town ( /theaters/11552/ ). It was built and owned originally by the builders and owners of the Clintonia, the McCullom family from Hoopston, IL, who also owned the Lorraine theater there ( /theaters/780/ , http://www.lorrainetheater.com/ ). Seen many movies there, including in 1970, Midnight Cowboy. Midnight Cowboy, being rated X back then would not have shown at the Clintonia, only at the drive-in, even though it won the Best Picture Oscar.

I saw a few films there during it’s “resurrection” in the early 90’s. From what I can remember the projection stuff was very old, possibly original. I believe that the owners in the 90’s were the same as the Harvest Moon and that they closed it down in, if I recall, 1994 because of a rash of vandalism and break-ins. AS stated, it’s screen lives on In Gibson City, IL at the Harvest Moon.

My husband & i took a trip over to see the wind turbines by Bloomington, IL & wow are they tall, towering over 2 storie homes in corn & bean fields but anyway, we also drove by the Harvest Moon drive in movie theatre & it was playing Surf’s Up & Delta Farce so it’s still going. I hope to get a chance to get over there to see a movie before the mosquitos get thick.

UPDATE: The auction at this address is now permanently closed.

Address is correct @ 54 Illinois 54, Clinton IL. Auction used drive in in its name.

“The name of the Family Drive-In, recently purchased by A. B. McCollum from Frank Stewart of Danville, has been changed to the Clinton Outdoor Theatre. McCollum also owns the Clintonia and Kaye theatres (in Clinton).” —BoxOffice, Sept. 19, 1953