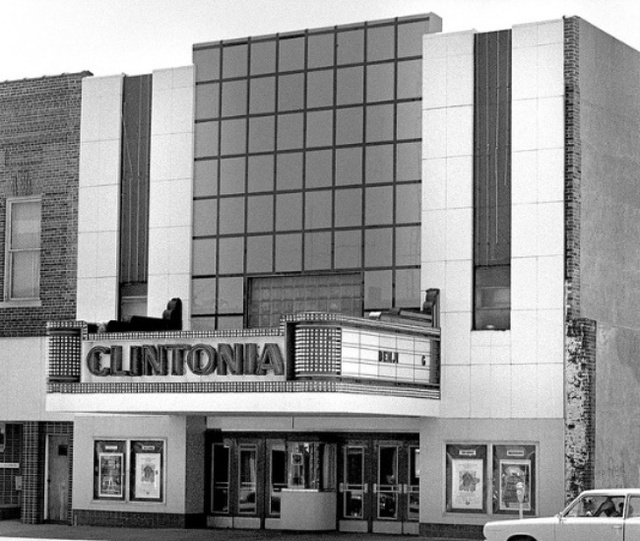 I would very much like a picture of the Clintonia. At the very least there should be one here. I can possibly dig one up at my parents house next time I come dorn to Clinton if you can’t find one.

THE NEW CLINTONIA THEATRE
In 1903 a new industry, motion pictures, was spreading throughout the United States. The New Clintonia was built by A.B. McCollum, designed by architect Alex C. Classon of Chicago and opened in Clinton on January 28, 1937 under the management of J.C.Nelson. It presented all that was new in theatre construction and offered all the comforts and luxuries available for modern screen enjoyment.
J.C. Nelson managed the New Clintonia until 1965 when he purchased it from A.B. McCollum. In 1973 he retired and sold the Clintonia and the Clinton Drive-In Theatres to Merle Wagner who still operates the Clintonia.
Submitted for the book by J.C. Nelson

Great post, Twistr54. Thanks. Didn’t know Jense Nelson was the original manager for Mr McCullom. I did know he was the owner in the late 60’s and early 70’s. Does that book say anything about the Kaye Theater in Clinton? It was a much smaller movie house about a half block from the Clintonia. There was also an “opera house” in Clinton – the building is still in use in the business district.

Here is that picture from the Pantagraph Newspaper showing the Clintonia marquee just before it was demolished. This is a great shot because everyone who went to the Clintonia as a kid will remember these ladies. I especially remember the one who worked the snack bar. :P

The caption under the picture is:

Wow, thanks for posting that picture. It makes me want to drive over to Hoopeston to go to the Lorraine because they were so similar.

Henry Rennick, for a number of years, had promised that someday he would surprise Clinton. On Sept. 6, 1894 he did just that with the opening of his Rennickâ€™s Opera House on the town square. Henry was born at Farnascullogne, near Lisnaskea, County Farmanaugh, Northern Ireland on Nov.27, 1842, came to America at age 6 and fought in the Civil War when he was 20. In 1862 Henry came to Clinton as a partner of â€œ Sackett & Rennickâ€ grocery store.
Sometime in the 1870â€™s Henry bought DeWitt Hall- the only place in Clinton suitable for public gatherings. His plan for an Opera House was to honor his wife who loved the theatre and opera.
In 1893 Henry removed the front of DeWitt Hall, added another floor and lengthened the entire structure to the rear street. Red sandstone was laid up to enhance the front facade with a stone at the top which reads â€œRenneck Opera House.â€
A wide front entry stairway was installed to the second floor vestibule. The Opera House could be entered by either of two doors. The main floor sloped to the stage providing a good view for every seat, including those in the gallery. From the parquet floor to the ceiling it was thirty-five feet with a done for ventilation in the center which was fitted on the interior circle with incandescent lamps. Some two hundred electric lamps graced the interior of the house proper-quite a spectacular sight for Clinton in 1894. There were high windows on the exterior walls which could be opened from the top to allow for cool air.
The stage measured 42x24 feet with an 18x24 foot proscenium and was fitted with the latest in elegant scenery. Dressing rooms, with rear door exits, were located in back of the stage. The hall was acoustically treated.
The house would seat 700 people in comfortable opera chairs. They could relax in the splendor of its handsomely done interior as decorated by Mr. Lowery, a Farmer City boy who made his mark as an artistic decorator of public buildings and private homes in Chicago.
Carpentry work was done be Esban and Fred Edberton, plastering by Charles Sloat, painting be William Kohm and electrical work by Lute Davis. Fitting up the stage was under supervision of the Opera House manager, Mr. Arthurs.
Before it wa completed, the project was to cost Henry Rennick upwards of $14,000, a great sum of for that time.
The audience was on dress parade for the most fashionable night of the season. Ladies were without hats and in their finest gowns, men displayed broad expanses of white shirt bosoms and low cut vests. Diamonds sparkled on male shirt fronts and at the throats of the ladies. And so began the era of Rennickâ€™s Opera House of Clinton, Illinois.
For years Clintonâ€™s residents thrilled to the plays and programs that echoed on and on within the walls of Henryâ€™s dream come true. Stories are still told of the once exciting plays, city programs, and school graduations held there.
Grand Opening night was celebrated by presentation of the fashionable comedy, â€œThe Charity Ballâ€ under the management of Bew Yorkâ€™s well known dramatic managers, the Frohman Company. There was not a large audience for the opening which was attributed to wet weather and the high $2.00 price of admission.
However the play was a success, of high literary merit and artistically represented-a tribute to the new opera house and Mr. Rennick and Manager Arthur.
In later years the vestibule was to be converted to office rooms. The opers house is now an empty shell-stripped of its beauty-to the bare walls. Henry Rennickâ€™s great grandnephew, Charles Rennick, visited here in 19 to reminisce of the glamour and happiness created be Henryâ€™s â€œsurprise to Clinton.â€

Submitted to the book by Charles L. Rennick, the Rennick Family Historian and Genealogist Bremerton, Washington and Palm desert, California.

In later years the vestibule was to be converted to office rooms. The opera house is now an empty shell-stripped of its beauty-to the bare walls. Henry Rennickâ€™s great grandnephew, Charles Rennick, visited here in 1978 to reminisce of the glamour and happiness created be Henryâ€™s â€œsurprise to Clinton.â€

Hey, I live in Clinton and word is the city is going to build a new theater in the future!!!

I own an architect’s drawing of the facade of this theater. The initials in the corner are AJC. Thanks to all who have posted, especially the photo of the ladies in front of the facade, I think you can really see that it is the same theater as my drawing. I will try to upload a photo of my drawing (if I can figure out how).

I personally do not know much about this theater. I had a mother that grew up in Clinton Ill. My Grandmother was Pat Cruthis a former teacher that taught school in Clinton. Both my mom and my grandmother have told me somethings about this theater not very much though. I was told that the buildings roof caved in as said here and that it was demolished. My mom however said she remembers going here as a kid to watch movies.