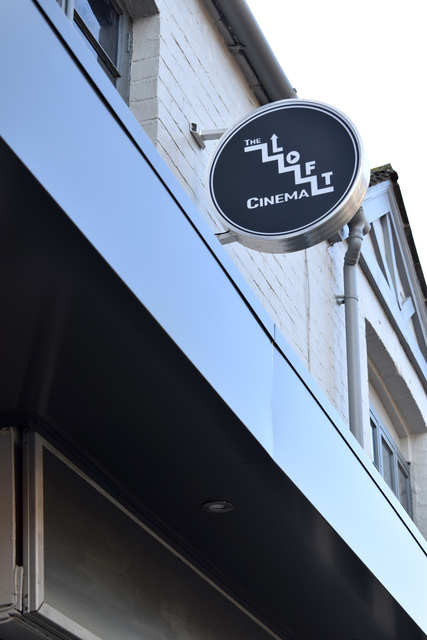 Located on the third floor of a building containing the Dog House restaurant. The Loft Cinema was opened on 19th December 2018. Seating is provided on sofas rather than individual seats. Films are screened digitally with revival films nightly, classic films on a Sunday and children’s films on a Wednesday matinee. Food is served, supplied from nearby restaurants.

When I visited the Loft Cinema, on Thursday 20th June 2019, I was delighted to meet owners Jon Jones and Fiona Bain. Their background is in bars and clubs (Jon owns the nearby Mamma Jammas nightclub), but more recently they ran AJ’s pool and snooker venue in the premises now occupied by the Loft. A rent increase led them to rethink the business and, both being film fans, they hit on the idea of transforming the space into a boutique cinema, with comfortable sofas and table service. The first film, on 19th December 2018, was Quentin Tarantino’s “Pulp Fiction”. The premises are surprisingly spacious, and allow for an extensive bar. They are still experimenting with the programming: On my visit I enjoyed a rare big screen outing for Francois Truffaut’s “Jules et Jim”, the latest in a series of films from the French New Wave. (Sadly, the Dog House restaurant, on the ground floor, closed in early 2019.)