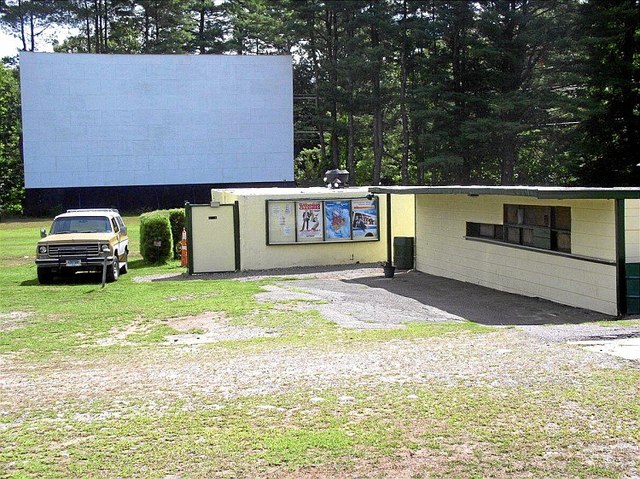 The Pleasant Valley Drive-In in Barkhamsted, having opened in 1947, is one of only two drive-ins remaining in the state of Connecticut, as of 2014 (the Mansfield Drive-In in Mansfield Center is the other one).

Its single screen, 250 car capacity, is open seasonally on the weekends and Thursday evenings in peak summer, and shows first run movies. The McGrane family, who also own a local diner, bought this drive-in in 1995 when it was being sold due to its owner fearing competition from a new multiplex being built nearby.

Above address does not map properly. Use River Rd & Morgan Brook Rd.

i was in Cornwall Bridge in late July and saw a sign for movies on the gas station for the beginning of August for Wolverine and Turbo. I’m posting the pic now.

Chuck is the link

They went digital and the picture now is bright and super sharp. The sound went through an upgrade as well. It comes in deep and crystal clear over the radio!

Here is a link to their site so you can check out their weekly schedule! Pleasant Valley Drive In

There’s a superb story of the last weekend of the 2014 season with the current owner (Donna McGrane), the previous owners (Brady and Sally Miller), and the local guy who raised the money for the digital projector’s down payment (Travis Lipinski). The story’s at Entertainment Weekly of all places.

The 1952-53 Motion Picture Almanac showed the Rogers Corner Drive-In in Pleasant Valley, owned by Peoples Drive-In Theatre Corp., capacity 300. It stayed that way through 1966. It became Rogers Corners in the 1969-76 editions. The 1982-88 International MPAs had it back to the singular Rogers Corner, owned by D. Heilbron.

A 2013 Hartford Courant article said McGrane had owned the drive-in “for 17 years”. A 2008 New York Times article said that McGrane bought the Pleasant Valley “11 years ago”. Both suggest the purchase happened a year or two after 1995.

The Times also mentioned that “In the ’70s, like many theaters, it survived by showing what the multiplexes couldn’t: X-rated movies.”

That name of the Rogers Corner’s founder, co-owner and former president should have been Vincent J. Youmatz, who sued the corporation according to an article in the Dec. 3, 1949 Billboard magazine. “John Youmatz, Winsted, is the present president, with Louis Centrella, New York, as secretary.”

From the owner via private message:

In the 50’s it was the Peoples Drive In. It was changed to Rogers Corner when Don Heilbron bought it in the 70’s.

Brady Miller and his wife bought it in the late 80’s and changed the name to Pleasant Valley Drive In because Don had resorted to running X rated movies because people stopped going to the drive in and thats what brought the customers in. It took Brady 3 years before people started realizing it was a family venue again and only ran family movies.

I bought the drive in in 1996. This is my 22nd summer. Don Heilbron bought from original owners and Brady bought from Don I believe it was 1987 because he had owned for 9 years when I bought it.

I was involved in a special live performance presentation of Stephen Sondheim’s musical “Assassins” on Sept. 23, 2020 at the Pleasant Valley Drive-In, and I’m delighted to report that it’s a lovely property. I live only an hour away and it’s an easy drive, so I’m embarrassed to admit that this was my first time there. It will certainly not be my last. I look forward to next season when you can expect to see me back as a paying customer.

My thanks to the owner for accommodating the Warner Stage Company this week, and for your care of this beautiful site.