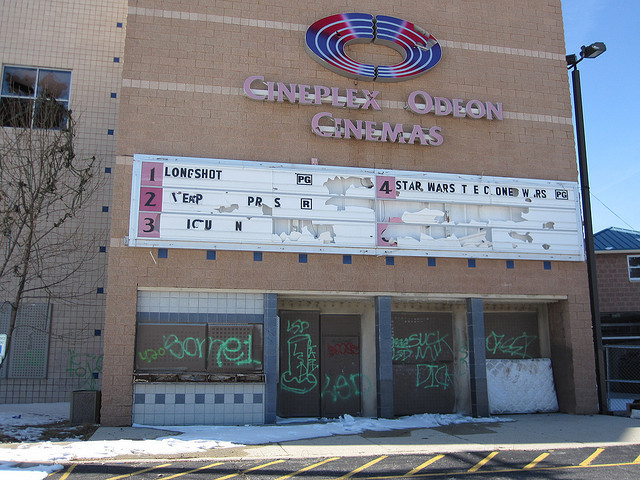 This cinema opened June 29, 1989 as an addition to the orignal Lincoln Village cinema that had three screens.

The first movies to show at Lincoln Village 1-6 were “The Karate Kid Part III”, (on two screens), “Do The Right Thing”, “Great Balls of Fire”, and “Batman” (on two screens).

The Lincoln Village was acquired by FunAsia, a chain featuring Bollywood films, in May of 2008. However, by December 2008, the theater was closed.

I don’t understand all the activity that took place around this property: it closing, the parking lot being closed off, the Jewish Center supposedly converting it. Somehow it all seems kind of weird. Hopefully something good will come out of all this. Right now it must be a mess inside.

The above states that the LV was previously operated by Brotman & Sherman Theaters. I thought Cineplex-Odeon built and originally operated this theatre.

Alderman has OKd a plan to convert the theater into a storage facility and turn its parking lot into a park. DNAInfo story here.

Interesting plan to convert this former movie house into a storage facility. It looks like the building’s basic shape will be retained. As I’ve said before, this was a theater that should have done well.

Paul Fortini: Brotman & Sherman operated the original LV; which would later get triplexed by Essaness Theatres. The LV 1-6 was build by CO.

Passed by yesterday and saw the conversion underway. There is a large hole in the north wall. It is nice that something is finally being done with this property. It’s been an eyesore for quite some time. Uploaded three images to photos section.

Complete tour of the Lincoln Village 6’s projection booth during its final year of operation by an employee can be found here: https://www.youtube.com/watch?v=gfXHovgb0dE

Interesting to note that this theater had dual ports and was designed for change overs in all 6 auditoriums but I’m not sure if it ever operated with out platters.

Whatever they are doing to the building it is taking forever. Construction still continues. They are also using different colored brick to add on, which doesn’t seem like it will look very good.