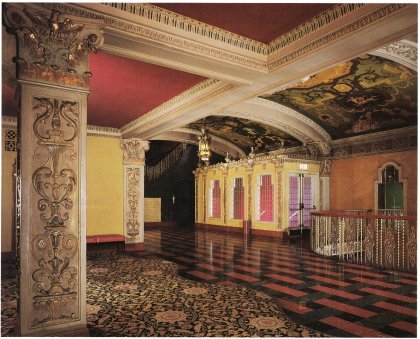 Built by Publix-Balaban & Katz. Opened on April 4th, 1931 with Nancy Carroll in “Stolen Heaven” and Laurel & Hardy in “Chickens Come Home”. The Nortown Theater was an Atmospheric style theater which was known for it striking seaside theme sea horse, mermaid, and zodiac motifs. It was designed by architect James E.O. Pridmore. The Nortown Theater was located in the West Ridge neighborhood on N. Western Avenue near W. Rosemont Avenue. It featured a 3/15 Wurlitzer theater organ which was opened by organist Eddie House ‘Chicago’s Premier Singing Organist’

The theater closed in 1990 after an unsuccessful triplexing in 1984 and was afterward used as a community center and still later, as a church.

Unfortunately, the Nortown Theater was demolished in June-August 2007. A great deal of the theater’s decorative terra-cotta and plaster was salvaged before the building was torn down. Condominiums and two small cinemas (which will cater to Pakistani and Indian audiences), along with retail space, were planned to replace the Nortown Theater. However these fell through and in January 2016 it was announced a Wendy’s restaurant would be built on the site.

I wish I could have seen this place when it was still operational.. I was privileged to be able to go in 2007 to assist in some of the salvaging. We found so many remarkable things in there. It was pretty cool to find the old candy wrappers, ticket stubs, matchbooks underneath the seats as they were coming out. It was beautiful inside even half torn down.

Ultimately, the occupant of the Nortown site will be…a Wendy’s.

Auditorium photo in below link.

To SarahFreeh212, I only saw one movie here ever. I think it was in the late 80s/early 90s, when I recall seeing a kiddie movie of some sort that was playing here. Wish I could’ve visited this theater more than once, since it was an amazing theater. It’s a major shame it wasn’t saved from the wrecking ball. :(

WEST RIDGE — The site where the old Nortown Theater was built in 1931 along Western Avenue will soon become a Wendy’s fast food restaurant, according to records. In December, city officials approved a building exception for the drive-through restaurant, sponsored by Ald. Debra Silverstein (50th), and the Wendy’s website lists a new location coming to 6324 N. Western Ave. Officials with the burger chain did not respond to requests for comment.

The property at 6324-46 N. Western Ave. was the home to the Nortown Theater from 1931-90 and was known for its nautical architectural themes — complete with mermaids on its facade — before trying to transition into the multiplex movie theater scene in 1984. The theater even housed a Wurlitzer organ before it was demolished in September 2007. The lot almost became a six-story condo building with retail and parking, property records show.

In January 2007, property owner and Dunkin' Donuts mogul Amrit Patel hired VOA Associates for work on the lot. By December 2008 VOA said in court documents it had “satisfactorily performed services” — but was still owed $90,746 by Patel. Patel also built the Monsoon Plaza across the street, which he planned to develop before the market crashed in 2008. The plaza was recently bought by BMW dealership owner Joe Perillo, though it’s not expected to become a car lot.

In May 2012, the property was foreclosed upon (in 2009 alone Patel faced 14 foreclosures and more than $28.4 million in owed fees — including $8.8 million for Monsoon Plaza’s construction) and by October it was bought by developer Adrian Tudor. Tudor was sued by the city in February 2013 for various code violations at the site, and in April he signed the building over to the city.

In October 2013, the city settled with Tudor, who agreed to pay $748 in fines and litigation fees, and legal documents show Tudor admitted to storing and parking vehicles at the property since December 2012.

I was born in 1969, and we moved out of Chicago in 1979 to settle in Los Angeles (my parents still live in the same house). However, the 10 short years I grew up on the Northside of Chicago (remembering probably 7 or so years), I recall this theater. I only recall two of the several movies my dad or both parents brought us to see–‘Invasion of the Body Snatchers’ in 1978, and one year prior–the grandaddy of sci-fi films…STAR WARS (or whatever you youngsters know the OG film as?). I do not recall the theater EVER having a light on. There seemed to ALWAYS be a film starting. The 70s were still the days one could go to a movie and not have any sneak previews. The downside was that if the showtime was, say 7:30, the actual movie started at 7:30. The good thing about it was the old-school projectors were two of them–the projectionist would load up the second projector, and on the cue, start it up, which led him or her to load up the other projector. That way, if you missed several minutes of the film, you simply stayed seated (like I said, I do not recall the lights ever being on) and the film would start over. You missed 11 minutes, you stay to see the next showing for 11 minutes. My friends and relatives stayed on the Northside (they all later moved to the suburbs) through most of the 80s, so it was always nice to see the old neighborhood including the Nortown. There was a hobby shop I used to go to as a kid on Devon and Western catacorner(sp?) to the Nortown. It closed sometime in the later 80s. I never did catch a film on any of the return visits which was a shame. As the years ticked on, I recall no one living out that way, so only saw the Nortown once again in either 2000 or 2001. I recall my cousin pointing out all the taxis parked outside, as it had become a mosque by then. I was discussing Star Wars with a friend, and it reminded me of the Nortown. Funny enough, over the years, I had thought it was named the Town and Country, but I think that was another, newer theater not too far away. I recall seeing what I believe to be a re-release of Fanatasia in the mid-70s, but that is another story for another theater’s discussion, lol. What I do remember is the Nortown was quite grand and regal and definitely had its old-school charm. Oh, and I recall it was a one-plex with a balcony (used as a smoking section, and the, I believe, Town and Country also had a smoking balcony).

Update to my long-winded post above where I went down memory lane. Was just in Chicago the other week with my 17 year old daughter and 9 year old son. My aunt lives very close to where the Nortown was (she’s lived there since 1991) on West Granville just west of California. We were leaving her condo to take a run to downtown and my kids were hungry. “What do you want?” I asked. My daughter looked up food nearby…“Wendy’s” she replied. “It’s just up Granville, and make a left at Western.” Yep, went to the site that used to be the Nortown…