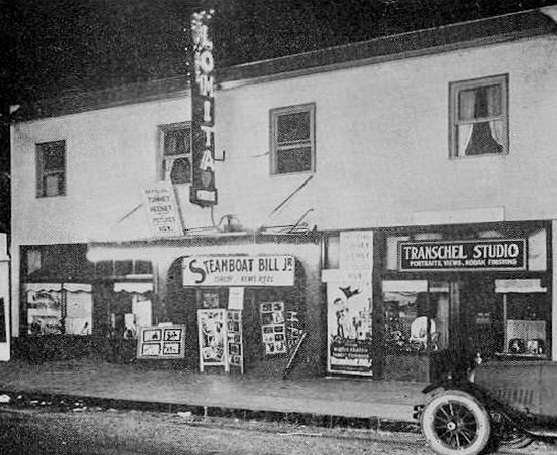 The Lomita Theatre, built in 1924, was reopened in 1925 by Chotiner Theaters, with alterations by Richard D. King, a prominent Los Angeles architect. A vintage photograph on the city’s web site shows the 500-seat theatre to be very plain in design, which in no way matches the style and grandeur of the Villa Riviera Hotel, also designed by King, a landmark in nearby Long Beach, which was built from 1927 to 1929.

The city of Lomita says that in early 1935, Frank Gumm leased the Lomita Theatre for movies and to showcase the musical talents of his three daughters. According to a biography of his daughter, Frances, Frank died later that year shortly after Frances signed a contract with the MGM studio in Culver City, 18 miles away. Frank would never know that Frances would go on to fame as Judy Garland.

Old newspaper listings show that the Lomita was an independent movie theater at least through the 1950s. In 2004, the building could be seen in downtown Lomita with its facade altered in appearance. The roof has been lowered but probably for structural integrity its high weather-beaten rafters were never removed and can be seen from the street.

I have driven down this street hundreds of times. I had no idea that a theater existed in Lomita.

An organ repo? Imagine having that job. “Okay, Horowitz, hand over the piano and nobody gets hurt”.

A Southwest Builder & Contractor item about this theatre, in the issue of April 4, 1924, says that the construction of the 50' by 137' building was frame and stucco. That would have made quite simple the eventual alterations (such as widened second floor windows) which can be seen by comparing the recent and historic photos linked from comments on July 27.

I’ve seen records of a Lomita Theatre listed at 1063 Narbonne Avenue – had the numbers of the street changed at some point?

Addresses and street names were changed in the early 1930s.

Advertised at 24333 Narbonne in the Torrance Herald, in June 1942. Keno Saturday and Sunday. Free Auto Park.