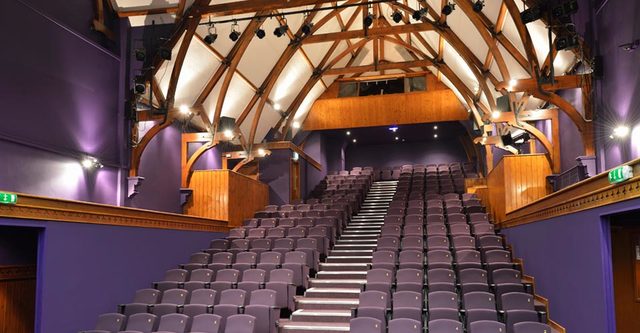 Located in Castle Douglas, Dumfries and Galloway, in south-west Scotland, The Fullarton is a performing arts theatre and entertainment venue.

Previously, the town had only had one theatre, the Little Theatre, based in an old army hut and run by the Unity Players. Truly a ‘little theatre’ (there were just 30 seats!) this was closed in the 1970’s due to concerns about public safety.

In 1984, the late Donald Fullarton, a member of the Scottish Community Drama Association, formed the Galloway Arts Project with the help of local amateur dramatics clubs.

The former St Andrew’s Church became available in the 1990’s, and was subsequently purchased by the project with funding provided by Stewartry District Council and Dumfries and Galloway Regional Council. In the mid-1990’s, further major funds were provided by the newly founded National Lottery and the Lochside Theatre opened in 1996.

After being refurbished in 2013 in order to meet changing requirements for performance spaces, its name was changed to Fullarton Theatre in tribute to Donald Fullarton. (As a consequence, its seating capacity appears to have been reduced from its original 200.)

Staffed entirely by volunteers, the Fullarton Theatre hosts a wide range of activities including, of course, frequent film shows.