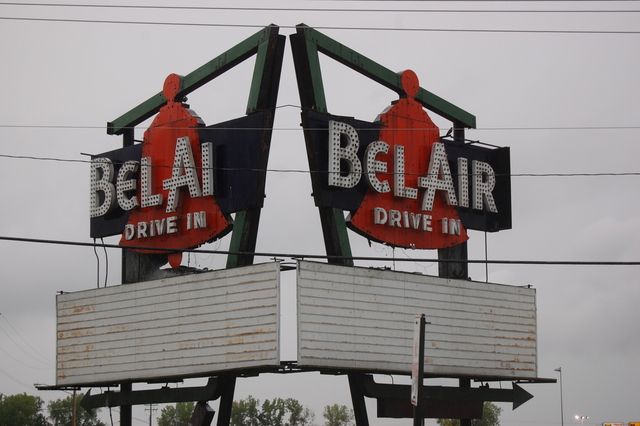 The Bel-Air Drive-In opened by Komm Theatres on December 24, 1953 with Robert Taylor in “Ride Vaquero” & Johne payne in “The Vanquished”. It was a single-screen drive-in, situated off the historic Route 66. It became part of the Mid-America Theatres chain, based in St. Louis. In May 1979, a second screen was built. At one time, the Bel-Air Drive-In could accommodate about 700 cars.

Its concession building also housed a tiny indoor seating area, with a large picture window, for when the weather was bad (since it was originally open year-round).

BAC Theatres ran the drive-in from 1982 until it closed in 1987. The Bel-Air Drive-In was completely demolished by the mid-1990’s except for its colorful and classy marquee (a large, bright red bell is behind the name of the drive-in), still in fairly good shape (except for the “R” in the “Air” part of the theater’s name is missing).

An industrial park is being constructed on the site of the Bel-Air Drive-In.

The Vietnam era movie could be one of the Rambo movies or one of the Chuck Norris movies(where went back to rescue soliders though to be missing in action?), i forget the name of those movies?

Dave Lounder THE DRIVE-IN THEATRE PRESERVATION SOCIETY TheDriveInGuys.com on July 21, 2018 at 9:32 am

The Chuck Norris movies were called “Missing in action”.

The (Alton) Telegraph story gives the location of the venue as Pontoon Beach. A detailed map search agrees.

The first ad I can find in the St. Louis Post-Dispatch for the Bel-Air (with hyphen) is on March 29, 1954. A Jan. 2, 1955 article there reported that the The Bel-Air Drive-In, owned and operated by the Jablonow-Komm Theaters, “is reported to be the first drive-in theater in this area to provide in-car heaters and an air-conditioned Ramp House for patrons who prefer theater-type seating.”

A Jan. 21, 1971 Post-Dispatch profile of Louis and Julius Jablonow said that “in 1953 (Louis) built the Bel-Air Drive-In in Granite City.” He said he thought it was the first outdoor theater with “in-car heaters, an enclosed seating area, and an elaborate cafeteria style concession building.”

Throughout the 1970s and 80s, the Post-Dispatch’s drive-in round-up ads would use hyphens for the Bel-Air inconsistently, without more often than with. Considering those editorial uses above, I would still vote hyphen.

Motion Picture Almanacs placed the “Bel Air” in Mitchell from its first appearance in the 1955 edition and never included a hyphen through its final list in 1988. All MPA drive-in list mentions:

Amplifying JAlex’s note, the best Google Maps address I could find is 1190 Chain of Rocks Road, Pontoon Beach, IL 62040. (That marks the point where the old entrance ramp, now Bel Air Drive, connected with old Route 66.) Pontoon Beach has some weird borders, but the old Bel-Air ramps are visible within the city limits, albeit a literal stone’s throw from Granite City.

The July 18, 1953 issue of Box Office reported that an 800-car drive-in was being built by “Komm Theatres” in Granite City.

The Aug. 15 issue added that the St. Louis branch of National Theatre Supply “furnished equipment for the Bel-Air Drive-In on state Route 111 and U.S. 66 north of Granite City, Ill., to be owned and operated by the Komm theatre interests of St. Louis. Equipment for that drive-in includes Simplex X-L sound and projection, lights and generators, Simplex speakers and posts. This drive-in is scheduled for opening about September.”

From the Nov. 27, 1957 Motion Picture Exhibitor: “EAST ST. LOUIS, ILL.—Members of the Knights of Columbus Council, Number 592. recently adopted a resolution condemning three of the drive-in theatres of this vicinity on the grounds that they had been showing ‘immoral and obscene’ motion pictures. The resolution also urged members of the Council not to patronize the drive-ins so long as the management continues ‘to show such pictures.’ The theatres involved are Shop City Drive-In, Mounds Drive-In, and the Bel-Air Drive-In. All are operated by the Jablonow-Komm theatre interests.”

From the Aug. 26, 1964 Motion Picture Exhibitor: “Reinhardt Weseman has been appointed supervisor for the five drive-ins operated in southern Illinois by Mid America Theatres. Weseman will retain his position as manager, Bel Air Drive-In, Mitchell, Ill.”

As a single-screener, the Bel Air Drive-In originally had a capacity of 500 cars plus a 200-seat capacity seating arrangement, and has the installation of a panoramic screen. The Bel-Air was first operated by former Madison County Sheriff chief R.L. Wesemann of Collinsville.

What’s crazy about the opening date of the Bel-Air is that the Bel-Air Drive-In opened its gates while the rest of the drive-ins surrounding the metro area closed for the season.

The Bel-Air Drive-In actually opened its gates on Christmas Eve 1953 with Robert Taylor in “Ride, Vaquero”, and John Payne in “The Vanquished” with no extra short subjects, but however, the management on opening day distributed toys to the children only on first night of the occasion.