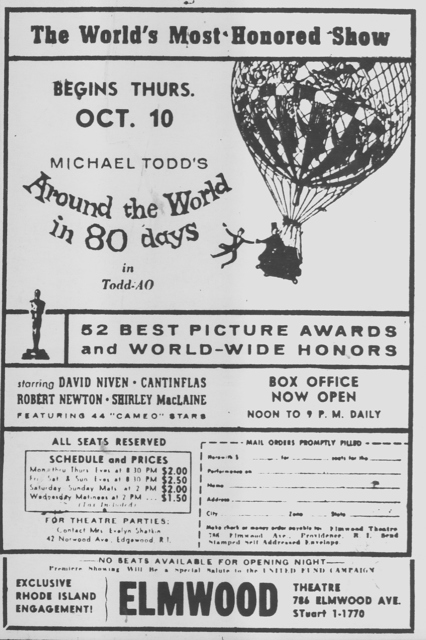 The Elmwood Theatre was opened in 1950. Like so many other old theatres in urban areas, is now used as a church. The marquee has been removed in favor of an awning. However, the old frames for the posters advertising the movies are still there. Only now they are filled with religious posters. The box office can still be seen as well.

The printing company in one of the storefronts (788 Elmwood Av.) was called Esquire Printing, right? It did all the printing and distribution of accessories for 1972’s “Last House on the Left”.

Paging Gerald A. DeLuca. Please contact me if you see this message. I have an Elmwood question for you.

“The Elmwood Theatre, Providence, has just completed the successful engagement of "Around the World in 80 Days” for an all-time Providence boxoffice record. In 29 weeks the Michael Todd film took in $152,000.“
(Item in Boxoffice magazine, May 12, 1958)

Gerald,Thanks for those great pictures from the Glory years.1986 pictures are heartbreaking.

The Theatre Historical Society has the MGM Theatre Report for the Elmwood – it’s Card # 542. Unfortunately, no one filled out the form. There is an undated photo of the facade. Movie posted is Gregory Peck in “Twelve O'clock High”, plus a Joe Palooka film.

ELMWOOD THEATRE PHOTO IN 1950 MGM REPORT The theatre had only recently been opened.

I lived on the other side of the tracks from the Elmwood As a young I frequented the theatre when it was traditional. The admission fee for a person under age 12 was 25 cents. I harbor many fond memories of those days. Then, motivated by Cinerama. Then, inspired by a entrepreneur name Mike Todd, a 70mm format named Todd AO surfaced. The theatre converted to it 100% and long rung films would run for no less than a year. I recall viewing Oklahoma and The sound of Music there. Mike Todd was an unusual person that proclaimed that he would live to be 100. Several weeks or months later, he died in a plane crash. Sad to look back at the theatre and what has become of Elmwood Avenue. In its long days, it as a fantastic place to go both during the traditional days and the Todd AO era.

Didn’t Sound Of Music play in Warwick on its original long run and not at the Elmwood?