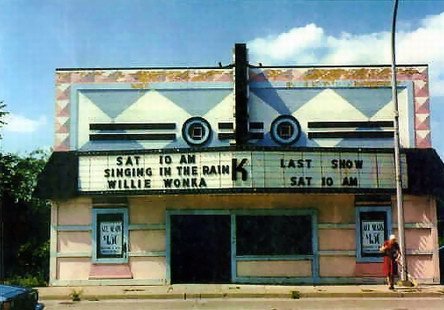 Opened in 1940, the Keego Theater was built in Art Moderne style, with “The Grapes of Wrath” being the first film shown there. In the 1970’s, it received a new marquee. The original was removed after being damaged by being struck several times by passing trucks once Orchard Lake Road was widened.

In 1981, the Keego Theater was sold to new owners, who planned on operating it as a pornographic theater. The city of Keego Harbor advised the new owners that this would violate city laws, but the Keego’s new owners took the city to court, and won. The city also lost when the case was taken to the Court of Appeals. Outraged citizens of Keego Harbor began to picket the theater relentlessly after its first X-rated film was shown, and later began to fill up a nearby parking lot used by theater-goers, leaving little other space available for patrons of the Keego. The theater’s owner eventually reluctantly gave in to the continuous pressure, and agreed to return to commercial films if the citizens of the city would patronize his theater.

The theater was split into two auditoriums in 1984 due to competition from video and nearby multiplexes. However, this was still not enough to keep the Keego profitable, and it eventually closed its doors. In 1997, Al Mansour purchased the Keego Theater and reopened it, again showing second-run features. A year later, however, the property was purchased by a pharmacy chain, and in June of 1998, the Keego Theater closed with two movie classics, “Singin' in the Rain” and “Willie Wonka and the Chocolate Factory”.

It was razed not long afterward, and the pharmacy built on the site. Mr. Mansour donated many artifacts from the Keego to the West Bloomfield Historical Society prior to it being demolished, including its Streamline-style vertical sign, its letters outlined with neon lighting.