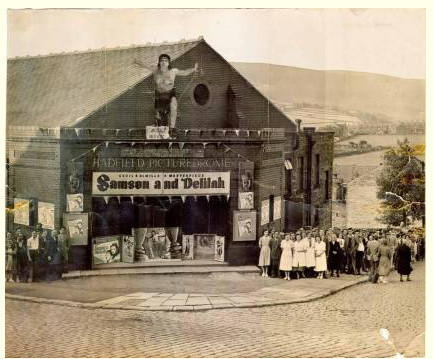 In Hadfield, a small town in the High Peak of Derbyshire, near Glossop, the Hadfield Picturedrome was built in 1922 at the junction of Bank Street and Wesley Street. Constructed of red pressed brick with terracotta dressing, the entrance hall was 16ft wide, with coloured vitreous mosaic with marble terrazzo floor, panelled walls and fibrous plaster ceiling. The auditorium was 116ft long by 56ft wide and the proscenium 36ft wide.

The chairman of the Picturedrome Company was Mr H. W. Dawson. The cinema opened in February 1923 with “The Eternal Flame”, starring Norma Talmadge and Adolphe Menjou. By 1934 it had been equipped with a RCA sound system A spot of off-screen excitement took place in February 1936, when £60 was stolen in what was described as “a daring raid”!

The 1953 Kine Year Book lists the owner as H. Talbot, of nearby Manchester and it had been equipped with a British Talking Pictures(BTP) sound system. At that time, shows were once nightly, Monday to Friday, with two shows on Saturday.

The Picturedrome closed in 1958 with Kenneth More as “The Admirable Crichton”. It moved over to bingo, which was still being played in 1987.

It is not known when that finally closed, but the building has been demolished, and housing now occupies the site.