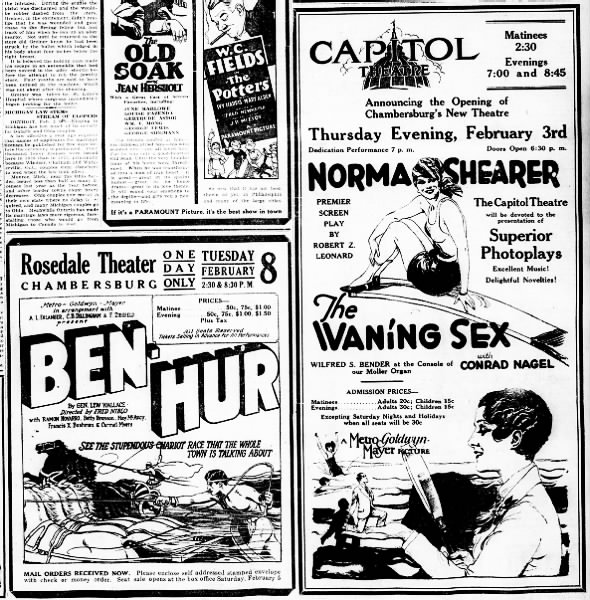 This item is from the “Theatres in Construction” column of Variety, May 5, 1926:

This history of the Capitol from the theater’s web site says that it was built for a Pottstown theater company, and that a local architect was hired to design it. The location is right for the Capitol, too, so it is very likely that the Variety item is about the Capitol.

Local architect Maurice R. Rhoads also drew the plans for the remodeling of the Rosedale Opera House in Chambersburg into the Rosedale Theatre in 1920. Rhoads died in 1926, but I haven’t been able to find out how early in the year. As the Capitol did not open until February, 1927, it is possible that some other architect was brought in to complete the project.

Hmmm…The Capitol looks like a nice, old-fashioned theatre, with the ticket booth in the center of the entrance and all.

Lost Memory: Thanks for this photo as I went through Chambersburg Pa 2 years ago enroute to Gettysburg and since I wasn’t driving we didn’t go down main street past this theatre…will the next time though!

Nice to know that this theatre has never closed and that it still has its original orchestra pit and organ!

Following weeks of uncertainty about the ceiling restoration, board members of DCI on Tuesday granted a construction contract to Novinger’s Inc., Middletown.

The total cost of the ceiling restoration is expected to be $315,000.

Portions of the walls inside the theater will be inspected and plastered, if necessary, he said.

“We are going to do a complete replacement of the auditorium ceiling,” Cullinane said.

“How long it takes is really

hard to say,“ he said. "We’re not driving anyone toward a deadline.”

The theater at 159 S. Main St. has been closed since April 30 when a 4- by 10-foot section of plaster fell during a Saturday night performance.

A press conference is scheduled for today to introduce Novinger’s and announce that a $250,000 gift from the estate of Cora Grove will go toward the ceiling restoration, among other updates about the project.

Despite a $550,000 construction debt prior to the ceiling collapse, Cullinane said the contract was not awarded to the lowest bidder because public safety was the biggest concern for the board.

Novinger’s experience working on previous restoration projects, including being the plastering subcontractor on the Capitol building in Harrisburg and the Hershey Theatre, he said, convinced the board the company was the most qualified to do the restoration.

“Other contractors recommended Novinger’s,” he said.

Cullinane also said Novinger’s suggested approach of cutting portions of the ceiling into smaller sections to minimize dust and debris during the removal phase, went over well.

Waste Management of Chambersburg has donated trash bins for the construction project, he said, noting that the free services would be a “huge cost savings” on the project.

In the next two weeks, scaffolding will go up inside the theater.

A search for a painting contractor is under way, Cullinane said.

Besides a fresh coat of paint on the ceiling, “(theater-goers) won’t be able to tell the difference when it’s all said and done,” Boeckman said.

“It is a tragedy because people were injured and a historic theater lost its ceiling,” she said.

Additionally, the ceiling collapse made some theater-goers question safety.

Nevertheless, she said: “The reality is, when it opens, those questions won’t be there anymore.”

I can remember every movie I saw as a kid at The Capitol. I was fascinated by watching the big chandelier being dimmed prior to a show. My mother took my sister and I every year to the AAA members night. I think they always showed “Mr. Hobbs Takes A Vacation” with Jimmy Stewart.

It is great to be able to attend the wonderful plays and concerts that are given there today. I’d love to hear the Moeller organ again.