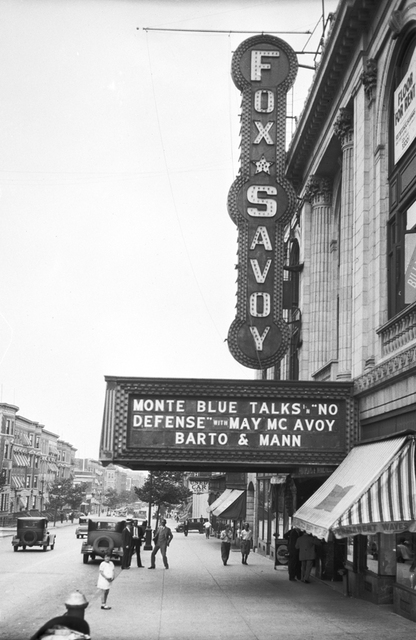 The Savoy Theatre was the largest theatre that William Fox ever built in Brooklyn prior to the downtown Fox Theatre. Opening publicity claimed 3,500 seats, but that has been debated ever since. Some industry year books say 2,750, but I would guess more like 3,000. The Savoy Theatre has a very large balcony with minimal space between the rows.

The Savoy Theatre was built at the same time as Fox’s Academy of Music in Manhattan, with Thomas W. Lamb as architect of both. The Savoy Theatre’s auditorium is in the Adam style, with boxed seats adjoining the stage and a shallow dome in the center of the ceiling. It first opened on September 1, 1926, with Fox’s “Fig Leaves” on screen, plus six acts of vaudeville. With program changes twice a week, the Savoy Theatre was considered the Fox circuit’s top Brooklyn showcase until the 1928 opening of the downtown Fox Theatre. After that, it became just another neighborhood movie house, but playing first-run for the area.

After William Fox’s bankruptcy, the Savoy Theatre landed under the Randforce Circuit, which, to signify the theatre’s importance, moved its executive HQ to office space in the building. The Savoy Theatre carried on into the 1960’s, despite all the social turbulence in the Bedford-Stuyvesant area.

Fortunately, it escaped demolition and became the Charity Neighborhood Baptist Church. Except for removal of the marquee and alterations to the entrance, the Savoy Theatre’s interior is virtually intact, though re-painted in whitewash in most areas. Some of the original stage curtains are still hanging, and I’ve been told that old scenic backdrops are still stored in the lofts.

The church moved out of the building in late-2012, and it was being prepared for demolition in April 2013. Demolition finally came in February/March 2014.

Matt, I know it’s not necessarily your thing to photograph adapted-use theaters, but were you ever inside the Savoy with your camera?

Hi, Sorry to say this, but there is a NYC department of buildings permit posted in window to left of theater entrance. The permit allows all interior partitions to be removed. I visited for a friend who has an architectural ornaments business. Whole interior has been gutted out. Ceiling, walls, seats all gone. Just large piles of plaster and bricks. Shortly additional permits will be issued allowing the demolition of rest of building. I had visited savoy in 80’s 90’s and again after 2000 when Rev. Armstrong was the pastor. Each time I was there it always looked like it needed major work which they could not afford. I use to do repair work in projection rooms of the small independent theaters, these old theaters were a good source of cheap parts. For the record NYC in 1943 had over 570 theaters in operation. Today only a hand full are still in operation and some of them are only part time. Also in Brooklyn the old Regent theater (aka Slave) may have been sold. It may be next on hit list of developers. John D.

its still not demolished i pass there every sunday to go to church i dint even see trucks.

I am sorry to announce that the theater is indeed slated to be demolished and replaced by a religious structure (a Synagogue and a 114 unit apartment tower). Very sad. Usually, a church saves these obsolete beauties but here it is destroying it. The facade looked worthy of landmarking but alas it never was. Farewell! http://news.buzzbuzzhome.com/2013/11/1515-bedford-crown-heights.html

This link has a photo of the facade: http://news.buzzbuzzhome.com/2013/11/1515-bedford-crown-heights.html

Sadly, this theater (The Fox Savoy) is being demolished as I type this. I have taken a photographs, to come.

This will replace the theatre.

What an ugly new building! They at lease could have kept the lobby like the RKO 81st St & Filmore East, but that’s progress I suppose.

Looks different from the 40’s, 50.s as I remember it. There was a ladder that was the length of the building, from the floor t the roof. That is how we used to sneak in in. Come across the adjoining roofs and down that ladder. Believe me it was high if you remember the theater. Great air conditioning during summer months.