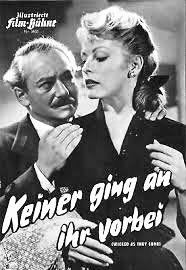 Located in the city centre district of St. Georg, close to the Hauptbahnhof (Hamburg Railway Station). The St. Georg Theatre was opened in 1914. It was designed by Fritz Hoher. In 1930 the theatre was re-named Atrium am Hauptbahnhof. It was closed in 1941 due to conditions in World War II. It was re-opened in 1949. CinemaScope was installed in 1956 The projectors were by Ernemann VII B abnd the sound system was by Klangfilm. The Atrium am Hauptbahnhof was closed in 1962.