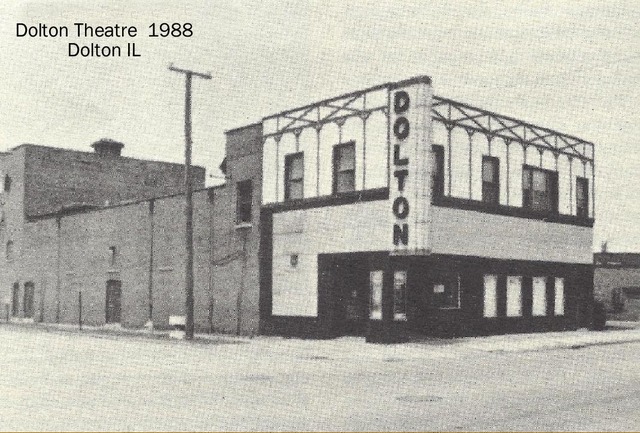 This small movie house opened in 1913 with 300 seats. It was enlarged in the late-1940’s and closed in 1999. It now is home to a nightclub, initially called Secrets Lounge and now Deja Vu.

I respectfully disagree with the previous post stating this movie house opened in the early 80s. The previous poster is off by many, many years.
The Dolton Cinema (AKA Dolton Theater) opened in the early 1900s. I’m almost certain it opened in either 1913 or 1914. It had many owners over the years, most of them local people. By the 1960s, the only types of movies shown were either B movies or movies that had already been out for quite sometime, but it was a good place to spend a Saturday afternoon and see a few Three Stooges shorts and a couple of cartoons, or if the kiddies were lucky, they’d get to see something along the lines of Plan 9 from Outer Space or The Incredible Shrinking Woman.
In the late 1960s or early 1970s there was a fire at the theater, and many local people wondered if it’d be torn down. It wasn’t. It was then bought out by someone who showed XXX movies, but thankfully didn’t last long.
An attempt was made to bring it back by a former owner, who largely succeded in bringing back people by charging only $1 per person. Unfortunately this owner became ill and died and the business was sold. It sat empty for awhile, but is now a nightclub.

Wasn’t this a Plitt Theatre for awhile?

To add to “former Doltonite” Via the history book, “Dolton 1892-1976” the first theatre in Dolton was in Lund’s Hall (about 140th and Lincoln Ave)in 1907, showing “magic lantern” and nickelodeon fares—operated by the Hruby brothers. They opened the Dolton Theatre (correct name) in 1913, catering to movies and community gatherings. The building was rehabbed and enlarged around 1949 (forcing Riverdale’s—then—Dale Theatre out of business), and closed for a period in the late fifties. The west end of the structure has a section raised a few feet higher than the rest—this to accomdate the riggings mostly used for vaudevillian acts. A pic today: View link

Here is an August 1948 ad from the Riverdale Pointer:
http://tinyurl.com/ralw7v

It should be available?
I turned it off at one point but it seems to be working from the above links.

Only went there once as a kid. I have always loved that corner building. I miss old Dolton.

Better to be nightclub than torn down.

When I visited the theater in the late ‘80’s the owner said that this used to be a vaudville theater before becoming a 100% movie theater. I have some images behind the screen I’ll try to find. There were crowsnests and a full wooden stage back there.

The Dolton Theatre (14112 Chicago Rd) was built in 1913 and managed by John G. Hruby, who was involved with many other theatres. As with many theatres then, it had a stage and was used for vaudeville and community events. Note the higher end of the building—that was not for the screen, but for rigging and pulleys used for stage play props. The theatre was rehabbed in 1949. I added a picture of the theatre from the 1988 era.

The original theatre in Dolton was in Lunds Hall in 1909—more a hall for community events than a true theatre and located kitty-corner from the Dolton on Lincoln Avenue.

If I remember correctly, didn’t the Dolton have a middle aisle in the middle of the theatre so patrons could cross over to the other aisles?