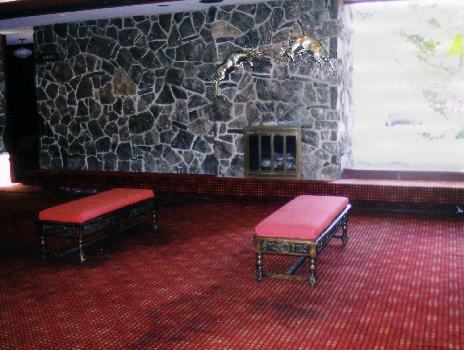 The Chief Theater was originally built as a single screen theater, opening January 31, 1969. It featured a spacious lobby with fireplace lounge, split granite walls and unique orange ‘candy’ light fixtures. The theater’s original Cinerama auditorium was divided into a twin in 1975 and four more screens were added on December 23, 1977, now having six seperate theaters, four in the orchestra and two in the balcony. It was renamed Apache Theater on June 23, 1978.

It was operated by Mann Theaters until a few years ago when the owners of the Heights Theater, Tom Letness and Dave Holmgren, purchased the building. They made some improvements, such as removing the video games from the fireplace lounge. They had intended to renovate two of the smaller theaters into a larger space suitable for 70mm and art house films.

Renovation costs, a rapidly deteriorating roof, and little incoming revenue led them to close the theater in the Winter of 2003. The owners decided to turn their efforts over completely to the operation of the nearby Heights Theater.

This often ignored icon of post-1950’s theater design was put up for sale and it was demolished in 2007.

The theater is still vacant as the weeds take over the parking lot. I hope that someone with an eye for design and film can take over the old Chief Theater soon. A theater with a bad roof is like a table without legs.

(Could someone on staff fix my links above? Gracias.)

I am a former employee of the Apache 6 Theatre. I began working in the theatre business at the Heights Theatre and when Tom bought the Apache 6, he transfered me to begin training as a projectionest and work on restoring the theatre. I was heartbroken when we were told about the theatre being closed. I have put two years of my life into helping make the Apache someplace better that the rest of the huge blan theatres that keep poping up. I know that if someone buys the Apache 6 that they will have many people from the previous staff that would like to return. Also since there is no other multiplex in the Northeast Minneapolis area it would most assuredly draw a croud.

Does anyone know if this theatre is still for sale? There might be some interest in reviving it in some way.

Yeah, chalk this one up to “demolished.” Just drove by it. Nothing but an empty parking lot that misses its previous occupant of 30-some years.

Very cool to see comments from 2004. I grew up just down 37th from the Apache Mall & Theatre. Now my grandpa lives in the new apartments where the mall once was.