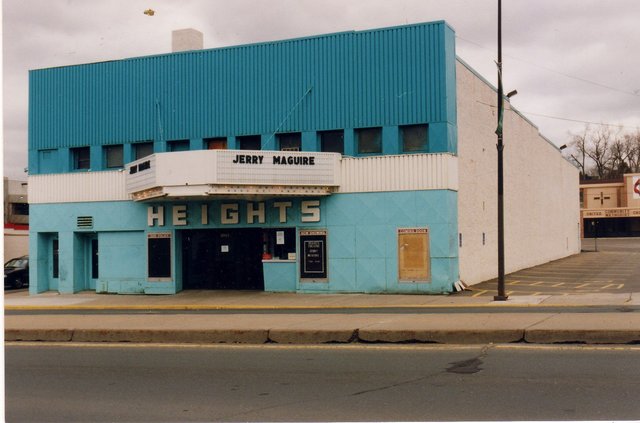 The Heights Theatre was opened in 1926 by Arthur Gluek of the Gluek Brewery family as a real estate venture.

Built in the Italian Renaissance style on the exterior, resembling a Florentine palace, the inside was decorated in the Beaux-Arts style, more popular 20-30 years prior to the theater’s opening.

The Heights Theatre contained a stage, orchestra pit, and Egyptian crystal chandeliers hanging in the auditorium.

In 1998, the theater was purchased by Dave Holmgren and Todd Letness who restored the Heights Theatre to its 1920’s appearance, including the original color scheme of the auditorium, uncovering the orchestra pit, which was covered over at some point decades ago, restoring polychromed woodwork that were walled over in the 1940’s, and adding new seats and carpeting.

A state of the art light and sound system have also been installed, as has the former Wurlitzer Pipe Organ of Radio Station WCCO which was originally at the Nicollet Hotel.

It is the first movie theater in the Twin Cities area to offer live organ music before the feature since the 1950’s.

Today, the Heights Theatre offers first run, art, revival, and foreign film, as well as concerts on its stage.

The Heights has a very cozy and unique auditorium, and the lobby is decorated with very neat nostalgia. I like to go to movies here not only because of the splendidness of the theater, but because it seems its owners really care about the place. The theater continues to look better and better. I would like to see more of a main street feel take shape around the building, however, as it feels a little out of place right now given it is practically the only building on that side of the road (most everything else is set back so far from Central Avenue that there is no streetscape) The Heights with a revamped Central Avenue would definetly be a Grand site.

From The Minnesota Daily:

Pick of the Week
War & Peace. The Heights Theater, 3951 Central Ave., NE, Mpls. Shows in two parts: Part I at 7 p.m. Thursday and Part II at 7 p.m. Friday. Then the whole enchilada will be shown on Saturday starting at 2:30 p.m. with a Russian-catered dinner break. $10 (valid for any screening). (783) 788-9079. “Holy Glasnost Batman, it’s the original 1968 print of War and Peace!” That’s right Robin and gang, War and Peace, the epic, cinematic, retelling of Tolstoy’s novel is back. The non-Audrey Hepburn version won the 1968 Best Foreign Language Oscar along with the hearts of critics and bourgeious alike. (In Russian with English subtitles, this baby has enough Pravda in it to kill a yak.) This version is a rare, highly sought 70mm print and thus deserves the last remaining 70mm screen in the cities, The Heights Theatre. Many film lovers agree that this is the best substitute for not reading the book, because director Sergei Bondarchuk faithfully follows Tolstoy’s story of love, life and death in Napoleonic Europe. This whale of a film is six hours long so you can either catch it in installments on Thursday and Friday night, or buckle up for the 2:30-10:00 thrill ride on Saturday (you’ll be given a 90-minute break to grab your sanity and some dinner). November 1-3.
-Sean McGrath

The Heights is in a class all by itself. Not only first run shows, but FUN showings as well. In the last few years, I’ve had the pleasure of seeing the original Planet of the Apes, Lawrence of Arabia, and the Wizard of Oz there. And Jerry Marien (the lollypop munchkin) was in attendance for that showing, and at 88 years young, it was wonderful to meet him in person. Thank you Heights!

“West Side Story” is screening here for a week. A new print is promised.

Oooh! I’m excited for you guys!! Wish I could be there to see “West Side Story”, since that’s my alltime favorite film! Anyway-it’s a great-looking theate, the Heights. Enjoy!!

Oh and West Side Story did well. That was really a fun show.

West Side Story must have done well. I was there on Monday or Tuesday and good crowd. The print was super. Minneapolis is so lucky to have the Heights.

Projection is in a variety of formats. 35mm reel-to-reel, 70mm, and digital.