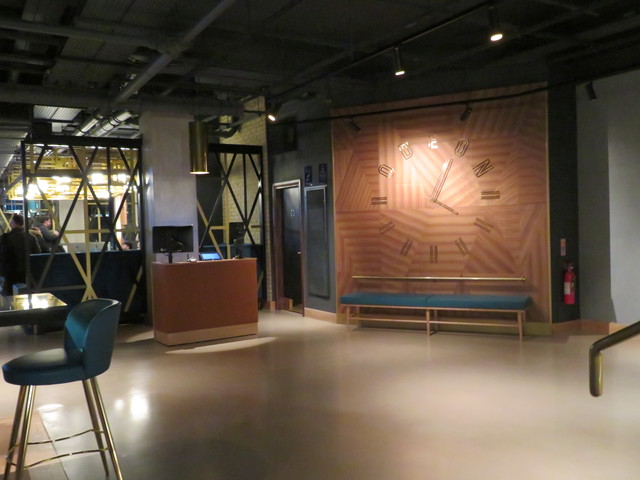 Located in the London inner-city district of Islington, on the old post office site, just off Upper Street to the north of the Kings Head Theatre Pub. The Odeon Luxe & Dine Islington is the first Luxe & Dine to be opened by Odeon Theatres Ltd. It opened on 22nd November 2019. It has been designed exclusively for adults, only those over 13 will be admitted.

Seating capacities in the 6-screens are:Screen 1-46 with RealD 3D, Screens 2-5 all have 30 seats and Screen 6 has 28 seats with RealD 3D. All screens have recliners seats and disabled facilities. There is a fully licenced bar and the ‘premium dining experience food’ is served by waiter service.

This is the first Odeon “Luxe & Dine”-branded venue.

Interestingly—at least in terms of potential, ahem, finger-pointing!—it was planned to be a “dine-in” venue (along the lines of “The Lounge at Whiteleys”) prior to the AMC acquisition, per Odeon’s 2016 press release, in which the project was announced.

A rendering of the venue’s public external entrance shows a glazed frontage, behind which is a very small lobby and two elevators.

The cinema’s page on Odeon’s website includes several images, one of which appears to be a rendering of a seating area in the foyer, which looks very attractive indeed. There is also a photo of an auditorium, though I suspect this is in fact of Odeon Luxe Haymarket, given the low ceiling and limited rake of the seating.

According to an article, the menu includes “Wagyu Beef, Corn Fed Chicken and Moving Mountains Vegan burgers, Wild Boar Hotdogs and Flatbread Pizza.” Drinks are available at an Oscar’s Bar.

I can only describe the “dine-in” concept with “waiter service” as a nightmare, but clearly a suitable “hipster” location has been selected!

(Incidentally, Odeon say that food can be ordered via their smartphone app—as if there wasn’t already enough potential “activity” in the auditorium to ruin the experience?!)

I visited the Odeon Luxe & Dine on Tuesday 4th February 2020, and saw the satirical black comedy drama"Jojo Rabbit" in Screen 5. It is an interesting concept, perhaps influenced by the success of the USA’s Alamo Drafthouse cinemas, which are specifically designed to encourage patrons to have a meal while watching the film.

Having been made very welcome by a member of staff, who showed me around, I ordered my Wagyu Beef Burger at 1.45pm and settled down for the 2pm screening. The ads and trailers ended at 2.15pm, and the film started, but the food wasn’t delivered until 2.30pm. This appeared to allow everyone to be served at the same time, but it was a little distracting having the waiter bustling about while the film was under way. (Interestingly, there were about 15 patrons, and, from what I could see, we all had something to eat, so the concept is clearly a winner – though eating isn’t compulsory!) And, I have to say, once the waiter had finished, it was quite nice to tuck into a rather tasty burger while enjoying the film! (I should add that I suppose it should be: I also had a small diet Coke, and the food & drink bill came to £18.15 – which I was surprised to discover included a Service Charge of £1.65!)

The watchword for this cinema is, of course, state-of-the-art luxury. So I was very pleasantly surprised to see a large ‘traditional-style’ “ODEON” clock in the downstairs entrance, and, on the stairs, an equally large plaque commemorating circuit founder Oscar Deutsch. These were lovely ‘heritage’ touches in an otherwise utterly modern cinema.