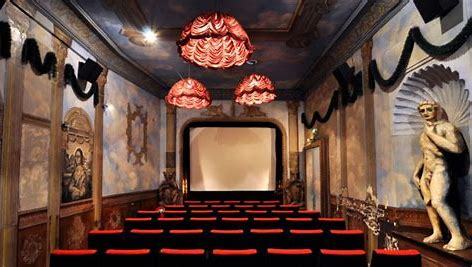 Located in the AU-Haidhausen district in the south of the city centre. The street address was originally Zeppelinstrasse 85 until 1938 when it was re-named Lillienstrasse. In 1910 a former variety hall was transformed into a cinema named Gabriel Tonbildtheater and was operated by cinema pioneer Carl Gabriel. In 1916 Oskar Richard Mohler took over and the cinema was renamed Gabriel Lichtspieltheater.

In 1918 it was re-named Museums Lichtspiele. (On the opposite side of the street is a museum). There have been 10 changes of management over the years. It was taken over by the current manager Mathias Wild in 2004. The Museums Lichtspiele was twinned in 1975 to the plans of architect Frank Ziegler. In 1976 a third screen was added and in 1980 a storage room was converted into screen 4. Current seating capacities are: 95, 70, 63 & 80.

The Museums Lichtspiele is one of the oldest operating cinemas in Munich. The movie “The Big Blue” ran for 3 years and “The Rocky Horror Picture Show has been running for 30 years every Saturday night. The style of decoration in Screen 2 was inspired by the "Rocky Horror Picture Show”, Screen 3 decorations were inspired by “Star Trek” and in Screen 4 it is themed after “The Big Blue”. Films are screened in their original English language versions.