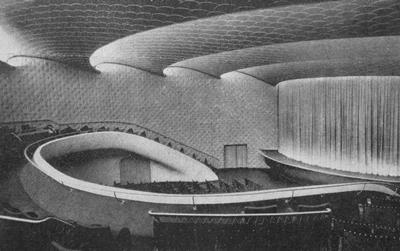 Located in Kassel in central Germany to the east of Dortmund. The Capitol Kino was opened in 1952 with 1,200-seats in orchestra and balcony levels. It was designed by architect Paul Bode in a Streamline Deco style. The auditorium had a ceiling made up of sweeping ribs which contained troughs of hidden lighting. It was equipped with CinemaScope on 25th December 1955 and the seating capacity was reduced to 1,178.

A new Cineplex Capitol 7-screen multiplex has been built on the site (which has its own page on Cinema Treasures).