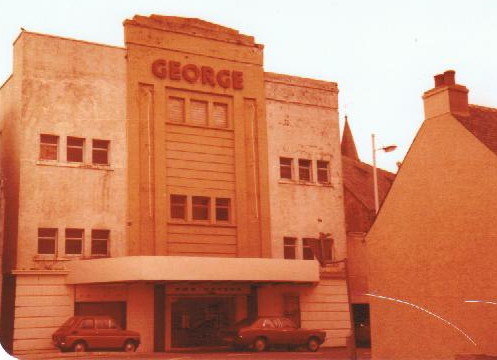 In the small North Ayrshire town of Beith, the Picturedome was an early cinema (it is not known when it opened, but it is listed - with no further details - in the 1914 edition of the Kine Year Book).

According to the 1923 edition, it was owned and managed by William Smith, 27 New Street, Beith. There was one show nightly, with three on Saturday, and three changes of programme each week. In 1935 the proprietor is listed as Picturedrome (Beith) Ltd, and the cinema had 700 seats.

In 1947 the Picturedrome was acquired by Associated G. P. Cinemas Ltd, run by founder George Palmer at 149 West George Street, Glasgow. He soon changed the name to the George Cinema, and it was now listed as having 655 seats. CinemaScope was installed in 1955.

The George Cinema closed in June 1983. George Palmer had died three years earlier, and his widow Janet, who had continued to run the company, had decided to retire. (She had put the cinema on the market in April 1982, and the staff had been given one month’s notice in December 1982. However, manager James Graham had reported increased attendances, so it stayed open. But then, according to Mrs Palmer, the change in the start of the film programme, to Thursdays, adversely affected the cinema.)

She had received an offer from Mrs Myra Haig Mills to purchase the cinema and convert it into an amusement arcade and snooker club. The sale was dependent upon the local authority granting a change of use, but Mrs Mills' application was successful, despite opposition from at least one councillor, who assumed this would lead to an application for a drinks licence (which he felt would “be unwelcome by the people of Beith”), and the building became Beith Leisure Club.

It is not known when that closed, but the cinema has been demolished and housing now occupies the site.