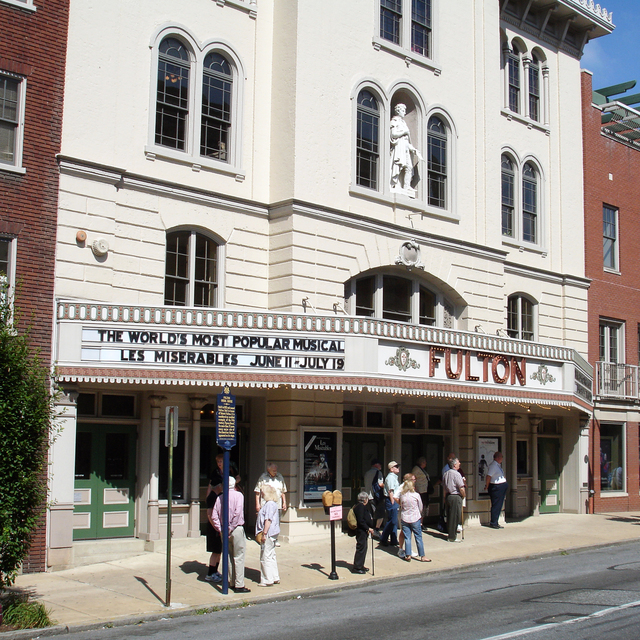 Built in 1852, by renown Philadelphian architect, Samuel Sloan, the Fulton Opera House is the oldest continuously operating theatre in the United States. An equally impressive fact is that it’s one of only THREE national historic landmark theatres.

Its Victorian design and two balconies are in sharp contrast to the movie palaces built between the mid-1920’s and throughout the 1930’s. Different, of course, but every bit as impressive as a 3,000+ seat movie palace. This 683 seat gem with its beautiful interior restoration compares favorably to any theatre I’ve seen.

The Fulton Opera House in Lancaster is listed in the 1897-98 edition of Julius Cahn’s Official Theatrical Guide. It was at the time under the management of B. and C.A. Yecker. The seating capacity is listed as 1,393. (I don’t know how accurate that figure is — it may include standees.) Ticket prices were 25 cents to $1. The proscenium opening was 28 feet wide x 26 feet high. The stage was 40 feet deep. The theatre had the “Edison system” of electricity. The theatre was on the ground floor, and there was an orchestra with 6 to 10 members. Local hotels included the Steven House, American, Hotel Schiller, and Miester House.

A nice ARTICLE ON THE FULTON, WITH PHOTO appeared in today’s New York Times.

Yes that is the Fulton Theatre in Lancaster. The theatre looked like that until it was “restored/remodeled” I believe sometime in the 1980’s if I am not mistaken. I remember seeing a lot of the Agatha Christie Margaret Rutherford movies at the Fulton back in the 1960’s. They generally did not show “main stream” movies. And at one time they changed the name to the “Fulton Art Theatre.” They also showed a lot of the English “Carry On” movies back during that time as well. At one time with the Urban Renewal projects tearing down the four movie palace theatres a few blocks away, the Fulton was the only movie theatre in downtown for quite a while. During that time they did some main stream Hollywood movies as there was no competition and they could book whatever they wanted. However, when the suburban shopping center theatres started being built, the Fulton’s days as a first run theatre came to an end. Now even the theatres built in the 1960’s and 70’s in the suburbs are gone as well. None missed as much as the movie palaces demolished before them.

That interior photo is from about 10-12 years ago when they remodeled the interior. They reduced the seating by installing more comfortable seats in a different arrangement.

The line in the intro saying that the Fulton is one of only three theaters in the U.S. that is listed as a National Historic Landmark may have been true at one time, but the NHL program’s web site now lists nine: the Fox in Detroit; the Fox in Atlanta; the Fulton; the theater of the Jacob’s Pillow Dance Festival at Beckett, Massachusetts; the Majestic in San Antonio; the Ohio Theatre in Columbus; the Pabst in Milwaukee; the Paramount in Oakland, California; and the Walnut Street Theatre in Philadelphia. Undoubtedly, more will be added to the list in the future.

The National Historic Landmark program is not the same thing as the National Register of Historic Places, a much longer list which includes a much greater number of theaters.

A beautiful piece of architecture. Photos from 2010: Facade,
Marquee

A beautiful piece of architecture. Photos from 2010: Facade,
Marquee

I grew up around Lancaster and was “movie going” in the late 60s to the early 80s. The Fulton Opera House Board of Directors at that time was adamant that the theater remain a live venue. The “Tadpole Players” plays for children theater productions were performed in the mornings on the weekends and some special film screenings would occasionally occur during the week. I first saw Disney’s “Fantasia” at the Fulton as well as “Monty Python’s Holy Grail” and “The Tales of Beatrix Potter” ballet film. A commenter above mentioned the tearing down of 4 movie Palaces in Downtown Lancaster. I’m not sure which ones they are referring to but the active theaters I frequented were: The King Theater on King Street, The Eric Pacific 4 Theater and Eric Twin At the Brunswick Hotel both on Queen Street as well as The Wonderland 4 Cinemas next to Dutch Wonderland on Lincoln Highway East and The Skinny Minnie Theater later called The Point of View Theater near Millersville University. Another theater located near Lititz Pike was the Eden Twin Theater. “The Comet Drive-in” Theater was located near Landisville and “The Sky Vue” Drive-in theater was on Lincoln Highway East near Dutch Wonderland. And that about covers it for the movie theaters I remember from Lancaster. Besides the Park City Mall twin theaters that first showed current films in both theaters and then switched to one screen regular movies and the other screen porno films.

Brechtbug: The four large downtown Lancaster theaters dennisczimmerman referred to that were demolished were the Boyd, the Capitol, the Grand, and the Hamilton. I believe they were all razed during the 1960s as part of a redevelopment project, so you probably just missed them by a year or two.