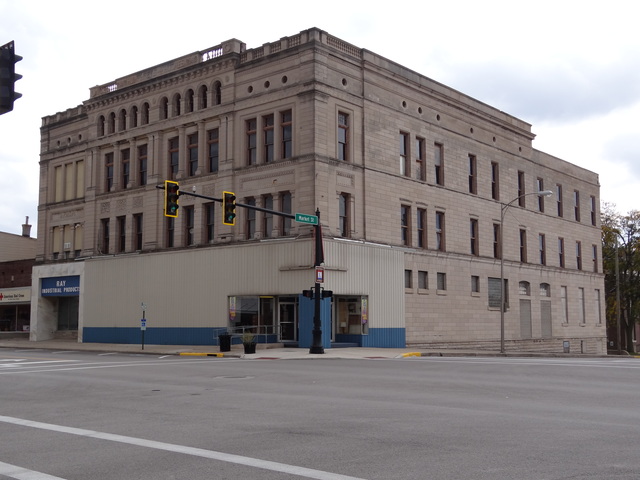 The 1914 Sanborn shows ‘Moving Pictures’ in the eastern storefront of the Humphreys & Hughes Block, a massive 3-story stone commercial block constructed in 1899. In 1907, this section (basically ¼, extending all the way to the rear) of the building was home to a glove factory. In 1914 it opened as the Lyric Theatre. It was closed on August 13, 1932. On October 15, 1934 it was renamed Ohio Theatre. The Ohio Theatre was still open in 1957.

At some point around perhaps 1960, a modernist storefront was applied to the ground floor of this section (while the remainder has received an excessively ugly siding job). It is currently home to an industrial supply company.

So there were two Auditoriums at the same time?

Not sure what to make of this, but the Humphreys and Hughes Block appears on the 1895 Sanborn, despite it saying 1899 on the top of the building. Not really important to the theater part of the history, I guess.

There is a possibility that the other Auditorium/Strand Theatre was originally the Auditorium Opera House?

I’m pretty sure it was. But I still don’t see how they operated with the same name until the other became the Strand around 1920.

This was the Ohio Theatre in 1934.
Photo added with matching signage confirming name.

Operated as the Lyric Theatre from at least 1914 thru at least 1932. It was first mentioned in advertisements run in The September 12, 1914 issues of the Motion Picture News and Moving Picture World by Alco Film Company, as a purchaser of one of their screens. The Lyric was also listed at this address in the 1915-1916 city directory and in the Film Daily Yearbook between 1926 and 1935, seating 350. The Picture with signage identifying this as the Ohio Theatre from Christmas season 1934 shows that the 1935 edition used the former name, more below…

By 1932, the Lyric had not converted to sound and was used as representative of rural theatres that never converted in the “Last Silent Picture Show” by William M. Drew. According to Mr. Drew, the Lyric closed on August 13, 1932. An ad ran in the local paper saying the closure was only temporary but, according to the author, it never opened again. The September 28 issue of the Film Daily did carry a one sentence item that the Lyric had reopened, but I haven’t found anything to back that up, the 1933 and 1934 editions of the FDY list it as closed.

The Lyric’s next appearance in the trades came in 1934, when the September 21st issue of the Motion Picture Daily ran a front-page article, “More Houses are Reopening Over Country”. The article was continued inside the paper and mentioned that Carl Moore had taken a 5 year lease on the Lyric, which was being redecorated and having new equipment installed prior to an October 15th reopening. The lease agreement was also mentioned in the September 25 issue of Variety, and finally in the November 17th issue of the Film Daily, which also listed the Lyric under recent openings. It fails to mention the name change however, though that would have happened with the re-opening.

Finally, the January 27, 1955 issue of the Motion Picture Daily (top right column) mentions the theatre was by then called the New Ohio Theatre and having only 267 seats.

I couldn’t find anything to backup the claim that this was called the Auditorium at some point.

A quick correction to the recent update to the overview based on my previous post: This theatre re-opened in 1934 as the Ohio. The name change to include “New” probably happened around the time of the article I linked to, in January of 1955. It is still listed in the 1955 Film Daily Yearbook as the Ohio Theatre.