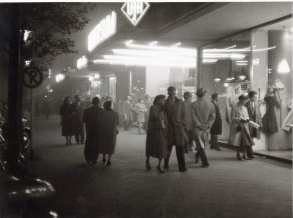 Located in the city centre district of Innenstadt. The Universum Filmtheater im Ufa Haus was opened on 14th October 1955. It was operated by the Ufa Theater AG chain. The cinema was designed by Fritz Brinkmann. The seats were by Bauer and the E IX projectors were by Ernemann. A 40channel sterophonic sound and Perspecta sound system were installed. In 1993 two more screens were added named Ufa Star with 130-seats and Ufa Comet with 73-seats.