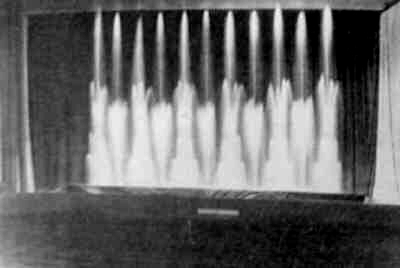 Located in the Kreuzberg district to the south of the city centre. The 1,200-seat Sanssouci Filmtheater was opened in 1911 and was operated by the Sanssouci Theatre GmbH. It was closed in 1915. In 1917 it was re-opened and was later re-named Sensations Lichtspiele, operated by Direktor Kregmeier. It later became a live theatre with variety programmes and was re-named Bendows Bunte Buhne after actor William Bendow. In 1934 the live theatre was re-named Theater am Kottbusser Tor. In 1941 it was re-named Neues Lustspielehaus. During World War II it was destroyed by Allied bombs.

It was rebuilt to the plans of architect Pierre de Born and reopened as a cinema on 11th February 1955, renamed the BBB Filmtheater. It was operated by Wallis & Limberger KG. The seating capacity had been reduced to 900. The auditorium colours were yellow & green, The size of the CinemaScope screen was 14.2x 5.6 meters. The AP ZII projectors were by Askania based in Berlin. A 4-channel stereophonic sound system was installed. The cinema had a stage (15x20 meters) which was used for live theatre and variety shows. The stage contained stage water fountains. At this time it was the biggest installation of water fountains in a cinema in the world. There were 54 colour spotlights and 20 water pumps. For operation the stage water fountains needed 10,000 litres of water per minute.

In 1966 the cinema was re-named Berliner Bunte Buhne Filmtheater. It was closed in 1977 and following a short period as a restaurant, the building was demolished.