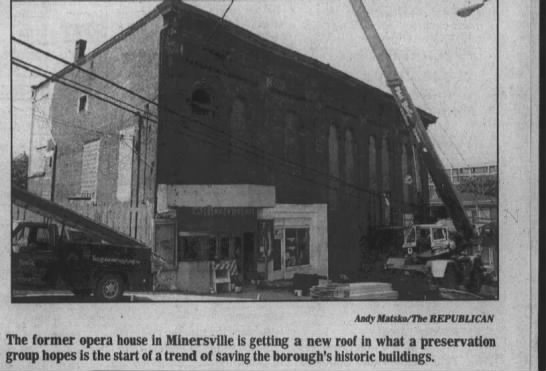 The Opera House was opened by 1891. It was showing movies by 1914. It had its entrance on N. 3rd Street. It was still open as the Opera House in 1957. The building is presently standing, converted into housing.

A book of Schuylkill County biographies published in 1916 says that Charles F. Kear had been the manager of the Opera House in Minersville since 1891. The Opera House was listed in the 1903-1904 Cahn guide as a second-floor house with 750 seats. Kear submitted capsule movie reviews that were published in several issues of The Moving Picture World in 1924, and listed the seating capacity of the Opera House as 450 at that time. Kear was also mentioned in the April 7, 1928 issue of Exhibitors Herald, when he was elected a vice-president of the regional exhibitor’s organization.