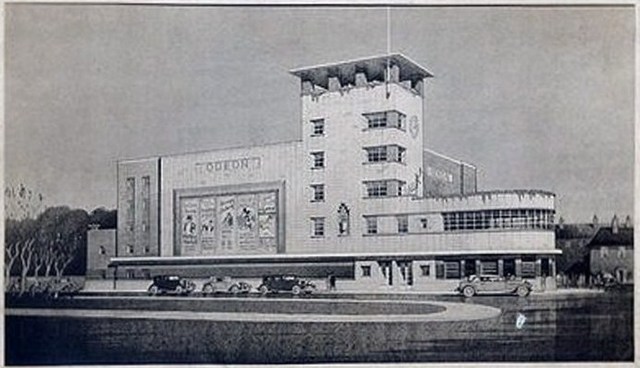 An early Odeon - the 7th new building constructed by the chain - which opened on 24th March 1934 with Cicely Courtneidge in “Aunt Sally”. The architects were Whinney, Son & Austin Hall.

One of the finest exteriors of the original Odeon buildings, this island site cinema was a triumph of the sleek curved deco Odeon style, and was the first to utilise the house style of faience and brick. As it was located just off the main shopping street a tower was designed with the name (back illuminated at night) to draw attention to the cinema.

There was a large cafe, in a curved extension in front of the cinema with the foyer slightly recessed behind.

The auditorium was an ideal shape - wide and slightly fan shaped - with seating provided for 1,076 in the stalls and 455 in the circle. It contained a huge four layered pedulent light fitting in the centre of the ceiling. Other decoration was rather sparce, rather too small panels were placed above the front stalls exit doors.

The Odeon had a 3Manual/6Rank Compton organ with an illuminated console on a lift in the centre of the orchestra pit, which was opened by organist Henry Winfield.

From the start the Odeon Worthing was massive success. At 32,500 pounds, it was the second most expensive to build to date for the chain, but soon showed its worth.

It was tripled in June 1974 (Rank’s usual drop wall treatment leaving the circle and front stalls intact). Screen 1 has 450 seats and 2 and 3 (under the balcony) 120 seats each.

It was closed on 27th September 1986 for redevelopment. But a surprise came to the developers in January 1987 when the building was designated a Grade II Listed building by English Heritage. This delayed the start of any redevelopment and a legal battle ensued. Sadly, the developers won through and towards the end of the year it was De-listed and swiftly demolished in late-1987. Part of a shopping mall and offices stand on the site today.

And another exterior photo here – shortly before demolition :–

Fourth exterior here – showing how spacious the gardens were around the front of the cinema.

Another photo of the rear of the Odeon here:

My earliest film going memories come from this cinema. Disney’s Robin Hood or Herbie goes to Monte Carlo. And more crucially the place where a lot of us discovered Star Wars, and returned again and again. I still remember queueing outside the right hand side for many a movie. Thanks for the pictures. I also remember the bright inside lobby and the flight of stairs to get to the screens.

CSWalczak thank you for the link to the 1934 link showing the interior. It’s almost just as I remember it before the tripling took place

When The Cinema Opened as where most Odeons was set up as a separate company with its own set of shareholders, balance sheets and dividends only unified later by the J. Arthur Ranks take over.. Then there was Odeon Circuit Management was set up to administer them..

Does anyone know when the Odeon Worthing stopped doing Saturday Morning Pictures, I think it was around 1980/81. I was in a group photo for the local paper article but without the actual date I cant even make a start on the archive.

I remember that last Saturday morning pictures. Children running riot. The projectionist stopped the film at least once to tell us all off. I still see the reporter,who sat through it with us, around Worthing. Eddie who was a lifeguard and face around town in the early 90s is now a reporter at the Herald. He may know who the reporter was. I haven’t see. The reporter for some time but he still looks the same tallish with mousy colour hair and a beard. I am sure he would know where the photo is. Interesting to see it again.