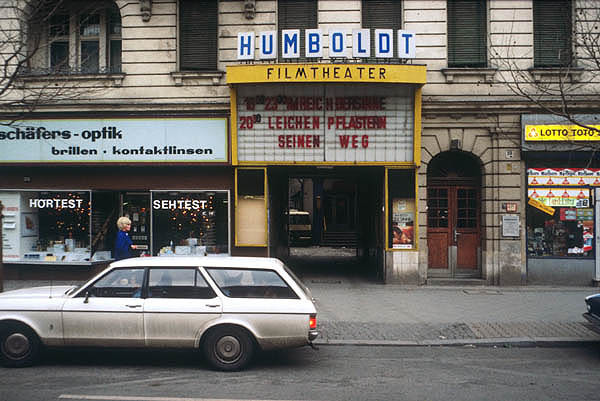 Located in the north of city center district of Wedding. The Joseph Frankes restaurant Schirm'sche Etablissement was converted in 1919 into the Humnold Lichtspielebuhne. It was designed by architect Artur Wolff. It had seats in orchestra and balcony levels. In 1921 it was operated by Decla Bioscop AG. In 1924 it was taken over by Ufa Theater AG. In 1935 the cinema was renovated to the plans of Bruno Meltendorf. In 1937 it was taken over by Thomas & Co. In 1941 the cinema was closed due to wartime conditions.

It was re-opened in 1949 and was operated by Werner Blank. Around 1952 it was re-named Humboldt Filmtheater. The size of the stage was 6x4x10 meters In 1955 it was renovated to the plans of architect Kuschel. In 1957 a CinemaScope screen was added and at the same time the cinema was operated by Telefox GmbH.

The Humboldt Filmtheater was closed on 2nd February 1984 and it was demolished around 1989.