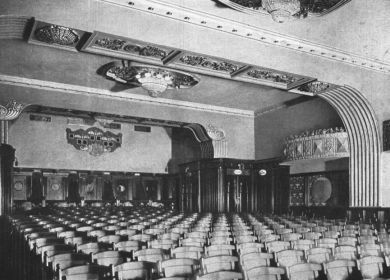 The Kammerlichtspiele was opened in 1916 and was operated by We. Waisenrate Verein, Zentralverband der Wiener Waisenrate. The architect was Stefan Fayans and had 394-seats, all on a single floor. The walls of the auditorium were green and the seats were red. In 1923 the cinema was operated by Friedrich Fehrer. In 1926 it was re-named Kammer Lichtspiele.

After World War II the cinema was renovated to the plans of architect Robert Kortas. It was operated by Kiba (Kinobetriebsanstalt Gesellschaft mit beschrankter Haftung). The Kammer Lichtspiele was closed in 1980.

In 1981 it was re-opened by Franz Schwartz and the seating capacity was reduced. At the same time the cinema was re-named Stadtkino and operated as a non-profit cinema. Later it was part of the Viennale Film Festival. It was closed around 1993 and the business was re-opened at a new address as the Filmhaus am Spitell in the 7th District. By 2019 the Stadtkino was operating as a nightclub named Club Schwarzenberg.