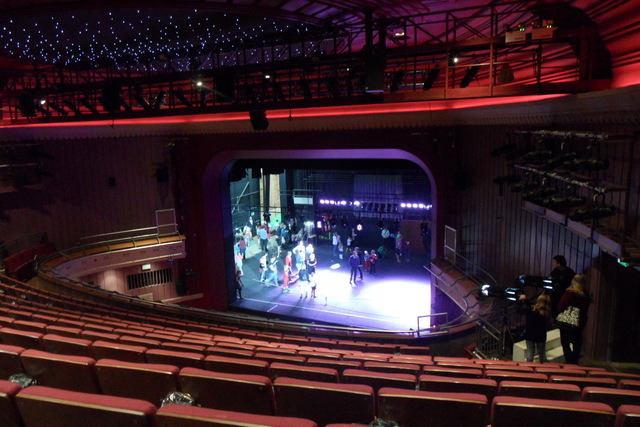 There has been a theatre on this site since 1757. The present building opened 30th September 1935 just 15 months after fire totally destroyed it’s predecessor on 22nd June 1934.

The new theatre was designed by architect W. H. Barton and has seating for 1,314 on two levels. There were two boxes on each side - one has now been filled in with a Art Deco style ‘fountain’ lighting feature and the other is curtained off and disused. There is a dome in the front portion of the ceiling and a plain rectangular proscenium arch with rounded top corners.

The exterior was austere even when built and faced with faience tiling, this has now been replaced by a brick facade which, it has to be said, is not the most attractive in the city.

In 1956 the Theatre Royal was acquired by Essoldo and turned into, more or less, a full time cinema. Only occasional pop concerts, a pantomime or, bizarrely, wrestling matches interupted the films.

That is until 1967 when the City Council, having twice turned down a bingo application for the cinema, took the decision to buy the theatre and return it to live use. This still included a summer season of films. However within a few years the Theatre Royal was the most successful provincial theatre in the country. The first year or operation as a civic theatre drew in 75,000 patrons. By 1969 this had risen to 275,000 and this justified the first major restoration of the building in 1970. This included the new facade and big extensions to the backstage areas.

A further upgrading occurred in 1992 and yet another major transformation was completed in 2007 to the plans of Tim Foster Associates.

Throughout the Theatre Royal auditorium has remained an attractive and well loved feature of Norfolk life.

A few photos of the Theatre Royal here:–

Further to Ken’s comments above, the Theatre Royal duly had a £10m refurbishment in 2007, designed by Tim Foster Architects. See my photos taken in August 2014.