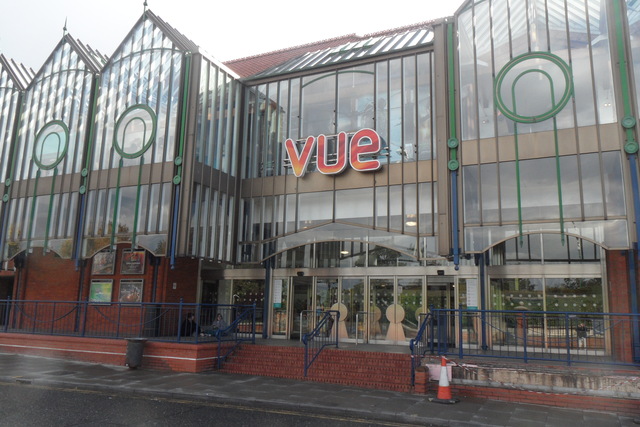 The 8-screen Ster Century opened on 2nd June 2000. Located inside the Castle Mall Shopping centre, the foyer is on the 4th floor, with the entrance and cinemas on the 5th floor. It was taken over by Vue in May 2005 and re-branded Vue.

Seating capacities in the screens range from 324, down to 126.

The Vue was mentioned in an article claiming it was encouraging juvenile delinquency:

The film is due to open on Wednesday and the Vue cinema in The Mall shopping centre in Norwich is giving a 9am screening for fans who cannot wait until the evening to see it.

The first two films in the series were extremely popular and children have been waiting weeks to see the third installment.

Cinema bosses are claiming they cannot screen it any earlier and want to be the first to show it in the city.

They argue it is better to screen it at 9am so children who would play truant to watch the film anyway will only miss the first half of their school day.

But education professionals are furious. They insist it is irresponsible to show it during the school day and cinema managers are only focused on exploiting kids to make money.

Daniel Pratt, marketing manager for Vue, said: ‘We wanted to be the first to screen it in Norwich.

‘We were planning on screening it at 7am in the breakfast club so kids could watch it before school – but due to licensing restrictions we weren’t able to.’

Mr Pratt said by showing the PG film at 9am they hoped youngsters would return to lessons for the afternoon.

He added: ‘We have still got screenings after school, the film is on general release from that day and it’s standard to show it at 10.30am. The film would have been showing during that day anyway.’

But to entice families the cinema is offering parents the chance of watching a more adult alternative film, the Coen Brothers' Burn After Reading, while their children watch the musical.