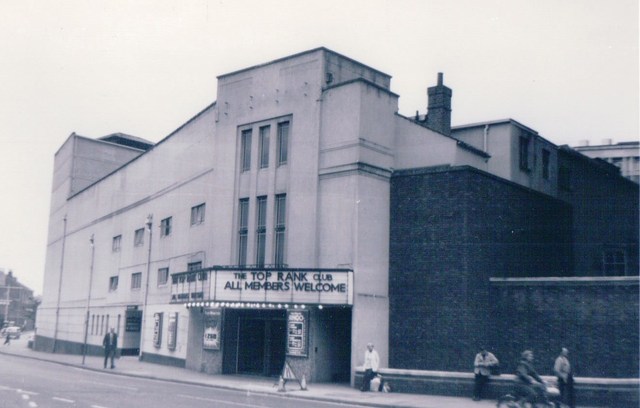 Anyone glancing at this depressingly metal clad featureless building in recent years would be hard pressed to imagine that this was once an Art Deco style super cinema. It opened as the Carlton Cinema in 1932, was enlarged and reopened, with double the number of seats - now 1,920, only two years later in 1934 when it was operated by Lou Morris. Two years after that it was taken over by County Cinemas and then by Odeon Theatres Ltd.

After the city’s Gaumont cinema was closed and demolished in 1959, Rank rebranded the Carlton Cinema with the Gaumont name which lasted until closure in 1973.

It reopened as a Top Rank Bingo Club immediately and remained a bingo club until closing as a Mecca Bingo Club on 18th April 2011 when serious structural defects were found in the building. The building was demolished between June and August 2014.

A photograph of the Gaumont in the Summer of 1971:
View link

And a photo as a bingo hall here:–

I was working in an office nearby and I remember getting free tickets to see Vanishing Point (Barry Newman). How prophetic it turned out!

See my photo taken in August 2014. The cinema was still standing, albeit in the process of demolition.

This theatre did run pantomimes. It had two proscenium arches, the original one and a later plaster one inserted, further forward, to take the screen curtains when a larger screen was installed for 70mm road shows. This was later taken out of use so that the stage could be used again for pantomimes.This could be seen after bingo took over. It had a Compton organ installation under the stage, that was removed before bingo started. The same staff used to operate the projectors for both this and the Odeon. The bingo staff could relieve those at the Odeon at times before Rank sold-off the bingo halls.