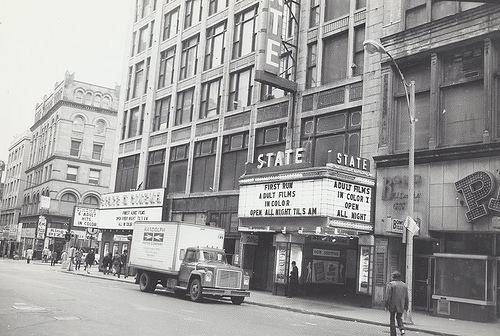 Opened on April 14, 1879 as the Park Theatre in a conversion of the Beethoven Hall. It was across Washington Street from the RKO Boston (Cinerama). It had around 700-seats located in two balconies and four boxes adjacent to the proscenium. It was renovated during the summer of 1889. The Park Theatre screened its first motion picture in May 1912.

It was taken over by Adolph Zukor and was remodeled, gutting the interior and removing the two balconies and stage boxes, and inserting a single balcony. It reopened as a 1,200-seat movie theatre on December 7, 1914 with Bessie Barriscale in “The Rose of the Rancho”. The theatre was decorated in an Italian Renaissance style. It was equipped with an Austin organ.

In 1929 the Park Theatre was given another remodel and classed itself as a movie palace. In November 1933 it became Minsky’s Park Burlesque Theatre. In 1937 it received another remodel and reopened as the Hub Theatre with 764-seats. By 1950 it was the Trans-Lux Theatre and finally State Theatre.

Always an adult house since I remember it from 1960. It was around the corner from the Avery Hotel and I believe there was an underground tunnel to the hotel for performers way back when it was a live house. The Strand Theatre was demolished in 1990 and the site became a temporary parking lot. It has since been redeveloped.

The pair of 1939 photos from Boxoffice trade paper illustrate why the Boston Landmarks Commission around 1985 did not consider this theater for inclusion, despite its great age. They felt that the theater interior had been ruined by renovations, and these photos prove their point.

1954 photo as the Trans-Lux added courtesy of MIT Libraries.

In the photo section there are 2 photos taken of the Park’s fancy facade in its early days as a “motion picture” theater. This facade was part of the building which preceeded the Crabtree Building – that’s why it doesn’t look at all like the facade in the later State Theatre photos. I once saw a photo of the Park entrance taken after it was built in 1879 and the entrance was through an old house-like structure something like the old Boston Globe Corner Bookstore at the northwest corner of Washington & School streets.

Katz- It did not have rear projection in its later days, at least. I knew someone who worked there in the 1970s and I’m 99% sure that he was in the booth at the rear of the balcony.

Katz – I have seen the floor plan from when the Trans Lux first opened in the late-1930s and it definitely looks like it had a rear projection booth at the rear of the stage. But at some point they must have got rid of it in favor of a regular balcony projection booth. The Park was a live theatre for many years, then in the 1910s it became a movie house; in the 1930s it reverted to stage use as the Boston outlet for Minsky Burlesque. Then a total remodel as the Trans Lux.